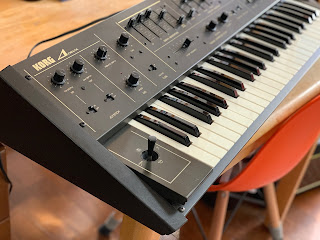 I do love a good stringer. Ive worked on a Yamaha SK20 and a Roland RS-09 and RS-101. This time it’s a Korg Delta DL-50 Strings Synthesizer, a lovely machine from 1979. It came out as part of Korg’s series of three Greek letter-named polyphonic machines. There was the Sigma and Lambda, both of which were largely preset machines, and then the Delta, which arguably offered the most control (until the Trident came out in 1980 and blew it out of the water).

The Delta is fully polyphonic, no mean feat then or now. Before you get too excited though, it’s basically just a glorified organ. It uses three divide-down oscillators to create all the notes (plus one more for high C). So yes, you can hold down all the keys at the same time but you’re limited to a square wave. A very nice square wave, it should be noted, but just that one waveform nonetheless. The sound is further divided into synth and string sections, the former of which is pushed through a variable filter (low or bandpass), the latter of which adds a nice ensemble effect to give it that string machine flavor. 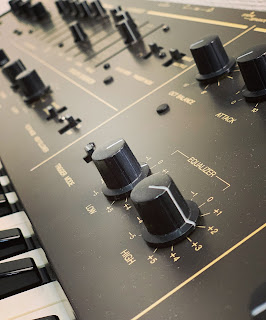 I took a chance on this unit on Yahoo Auctions. I don’t remember exactly what the description was (probably something vague like “produces sound”) but likely I was wowed by the cosmetic condition. It looks practically brand new. I gave it a quick wipe down and aside from a scuff mark on the end piece, it may as well have come right out of the box. Sound wise, however, it had more problems than its physical condition suggested.

The synth and string parts have separate outputs so I tested each one individually. The main issue was the lack of strings, just a hissy sound. If you strained hard you could hear the strings behind the wall of noise. At first blush, I thought the synth side was fine but upon further testing I could hear tell-tale crackling and intermittent noise. The filter was the likely culprit. Lastly, the noise mod function on the joystick didn’t seem to really do anything. 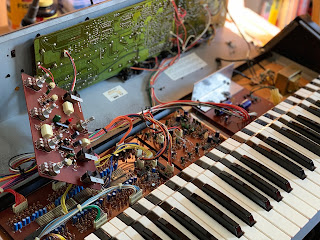 After a quick clean of the sliders and outputs with a little DeOxit, I started to take the screws out of the front panel. I said before that the Delta looked brand new but I forgot to mention the screws. They were pretty rusted and corroded. In fact, four of them wouldn’t budge and had to be drilled out. So before I went any further I bought all new screws for the front panel and spray-painted them black. I did the screws around the chassis as well so it looked uniform. A few small pieces of paint flaked off around where I drilled out the screws but all in all, it still looked great. The designers at Korg were kind enough to make the calibration trim pots accessible from the front panel so while I was poking around there, I adjusted the volume of the white noise and intensity of the resonance from Grandma’s living room to 21st century techno party. Much better.

Looking around online, I found that the filter section in the Delta is notorious for crapping out. I ordered a set of replacement parts on eBay. Usually I try to order the components separately and save a few bucks but this wasn’t really a bad deal. The culprit in the filter circuit is a gang of four orange film capacitors. The set came with new socketed LM13600 IC chips so I replaced those as well. That did the trick. If only the rest were going to be this easy.

I next turned my attention to the strings. I tried the envelope settings and it was affecting the attack and sustain of the hiss, so I knew the problem was before the VCA. I could also hear that the EQ was working as well. Someone on Facebook had a similar issue and said that they traced the problem to one of the AN6551 IC chips just before the VCA. I ordered four chips and replaced them all in the VCA board. No change. Crap. My friend over at MySynthFetish suggested that I use a wire with alligator clip ends to hot wire the audio from the various test points to the output. Using this method, I was able to trace the issue to IC-2 on the ensemble board. A fresh AN6551 solved the problem.

Lastly, there was the noise mod. Or lack thereof. Thinking the fault was probably in one of the AN6551 chips in the noise generator, I swapped them out but unfortunately, that didn’t do anything except let me practice my soldering skills. The same friend suggested I look at the transistors in the noise generator circuit and sure enough, transistor Q1 was different from what the schematics said it should be. It also appeared to be in backwards. The one I needed was no longer being manufactured but thankfully there was plenty of NOS around so I soon had a few in my hands. God bless the internet. The new transistor worked although the effect is pretty subtle. I wonder if a different transistor might make the effect more pronounced. The old wires connecting the panel boards kept coming undone so I put in some fresh wiring, then closed it all up.

This job was a little more involved than I expected and took kind of a long time, but it was ultimately worth it. The Delta sounds great now and I learned a few more tricks along the way. Happy days.