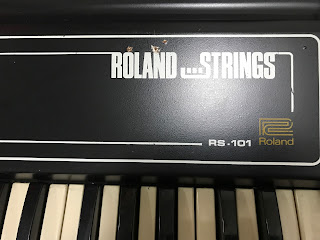 I got it in my head that I needed a string machine. You know, one of those divide-down polyphonic synths from the ‘70s that have basically only one sound: strings that don’t sound like strings but sound like a string machine which is entirely the reason you want one.

After spending a few weeks scouring Yahoo Auctions I found a Roland RS-101 for less than $100. That seems to be the magic amount for me. I’ll buy pretty much anything if it’s less than $100. I didn’t have the space for it but I bought it anyway, and when it arrived and I opened its built-in case, I regretted it immediately.

I knew it was going to have problems. I mean, it was less than $100 for a synthesizer from 1975. I was expecting the rust spots, the dead keys, the missing sheet music stand. I was expecting it to be well-used. But I didn’t expect it to stink.

In the mid-1970s, synthesizer polyphony was highly sought after. There were monophonic (and even duophonic) synths but not much with the kind of polyphony we take for granted today. If you wanted polyphony, you had to buy an organ, and that’s why so many prog bands used them. And also why many of the synths of the day had their front panel switches and knobs mounted under the keys, as they were meant to be stacked on top of organs. 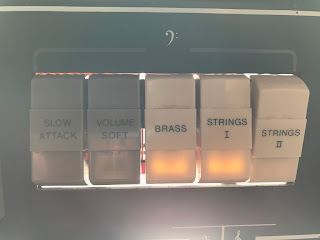 Enter the string synthesizer. For a brief time in the 1970s, there were something like 150 different models released. They were popular with prog groups (the Solina is all over Pink Floyd’s “Welcome To The Machine”) and on disco records. They were ubiquitous, and were made all over the world: in the USA, in Europe, and Japan.

The RS-101 is simplicity itself. It has three sounds: brass, strings I and strings II. Brass isn’t so brassy and sounds more like what might be a cello if you had never really heard a cello before. Strings I and II are variations on the same string sound, unsurprisingly. The keyboard is split, with separate rocker switch controls for sounds (all three can be combined), “slow attack,” and “volume soft,” the latter of which dampens the volume a tad. Additionally, there are sliders for tone control for brass and strings, separate sustain sliders for upper and lower sections, and amount of vibrato. There is no control over vibrato depth, nor is there vibrato delay.

What about the ensemble effect? A string machine isn’t worth very much without an ensemble effect, and the RS-101 does have it. And what a lovely ensemble effect it is, indeed. There’s no control over it, sadly, but those BBD circuits are really what makes the sound of this thing special. It’s heavenly, really heavenly. 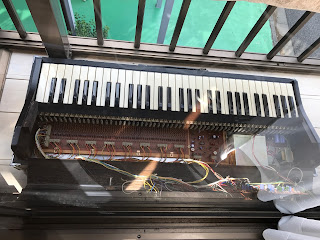 Which is why it was so hard for me to admit that I just couldn’t keep the stinker in my house. I’m used to used gear sometimes smelling like cigarette smoke. I hate it but usually airing it out on the veranda is enough to take the tang out of it. But this was worse than cigarette smoke. This was mold.

Every time I lifted the lid on the built-in flight case, I was confronted with a sickly sweet stench, like garbage on a hot day. I tried leaving it out in the sun with its insides exposed to the air but it was no good; the smell was deep inside. I’m allergic to mold as well, and just having it in the house was causing respiratory problems. I kept it long enough to record it on one song and then called the city to arrange for disposal pickup.

It sat out on the veranda in the rain for two weeks, and then one sad day I laid it out on the street to be taken away. I felt so bad throwing it away like that. I imagine it must have been shut away in some dark storage space for years, its wooden case slowly filling with mold spores, longing for the day when it could sing again. I hope it enjoyed its stay with me, brief though it was.

I’m hoping to get another Roland string machine some day, although this time I’m going to try for an RS-09. Less wood.