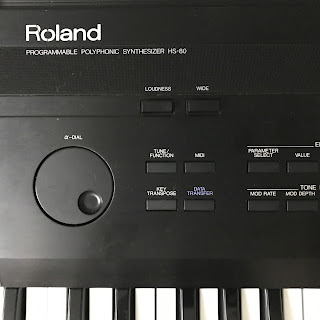 Although I listened to industrial music all through high school, and loved groups like Front 242 and Skinny Puppy, my interest in electronic music really exploded when I discovered techno and rave in 1991. I loved the energy of it but mostly I loved the sounds. It was unabashedly synthy, and each song was seemingly built around one or two incredible sounds that just repeated. It was glorious.

I loved all the hoovers, but especially the Dominator, so if you had put money down with a bookie in 1991 that I’d someday be the proud owner of an Alpha Juno synth then you’d be a winner today. Well, almost. Instead of buying a reasonably sized Alpha Juno or Alpha Juno 2, I had to go and get the HS-80 SynthPlus 80, the rather unwieldy and, it has to be said, ugly home version. Introduced in 1987, a year later than the original Alphas, this behemoth widened the case to include an amp and two speakers. Gone are the fetching membrane buttons, replaced with D-50-style black push-button jobbies. The whole thing is very Darth Vader and wouldn’t look out of place on an Imperial Star Destroyer control panel. 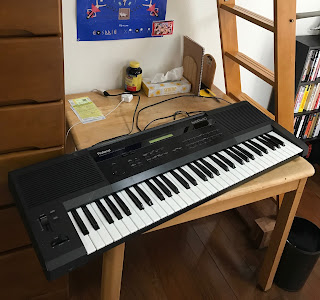 The guts, however, are exactly the same as the Alpha Juno synths. The only real difference is the lack of memory cartridge but it does have the tape interface like the Alpha Juno 1. I should also mention that because the HS-80 has a separate amp for the speakers, it has two extra sound functions: loudness and wide. Loudness boosts the volume and wide adds more stereo width. These two functions are not available through the main outs but they are present in the headphone jack, should you want to make use of them when recording.

Crack the HS-80 open and you’ll realize that the synth board is pretty small, and most of the home version is basically just keys and speakers. (In fact, a friend of mine actually chopped his down to just a module. Pretty cool.) Given that the speaker cones started disintegrating as soon as the paper hit the air, I decided to pull them out as soon as possible. I also wanted to reduce the weight. I live in a small apartment in Tokyo and the only reason I can have as many synths as I do is because my music studio is in a small loft, accessible by ladder. Carrying heavy synths up and down a ladder is pretty terrifying, so less weight is always better. 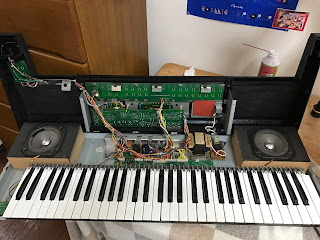 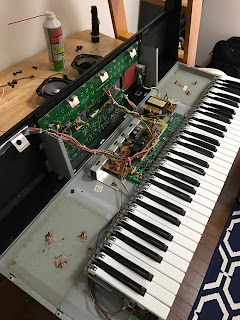 The speakers came out without much trouble, but when I closed it back up I realized it had developed a hum that was audible across the studio. It wasn’t in the signal, thankfully, so with the help of my friend who chopped his SynthPlus, we figured it was probably the power unit vibrating the metal body. With the weight of the speakers gone, there was little to prevent vibrations from building up. I stuck some rubber washers to the top of the power unit to provide pressure against it and when it was all closed up, it seemed to do the job. There’s still a slight hum but I barely notice it now. 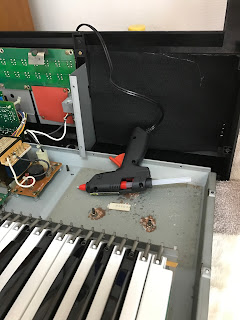 I also decided to replace the foam-like material that lined the inside of the speaker grills. It was also falling apart and I really didn’t want that junk getting all over the boards. I bought some black felt and a hot glue gun, and after a few tries I was able to get the felt to stick to the underside of the case. It doesn’t look like much on the inside, with thin tendrils of glue criss-crossing the underside of the felt, but from the outside you’d never know an inept middle-aged man had been splashing hot glue around inside it.

Like I said before, I bought the HS-80 for the famous Dominator hoover sound, also known as the preset “What the.” So imagine my shock and horror when the single sound I wanted—nay, the whole reason I bought it, even—was one of the few sounds that had been programmed over. With 64 factory slots and 64 programmable slots, that had to be some kind of coincidence. But it wasn’t hard to find the parameters online and I was soon gleefully programming in the Dominator. Like a lot of the old hoovers, the recorded Dominator was a sample and so sounded a little different than the real thing, but still, to hear it straight from the original machine, it’s a thing of beauty.

The key to the sound’s appeal comes from two of the Alpha’s parameters: the pitch envelope and saw-tooth pulse width. The Alphas are essentially analog synths but there are digital controls in there as well. The DCOs are particularly interesting, with a variety of pulse width waveforms. In fact, everything can do pulse width: the square, the sawtooth, even the sub oscillator. The envelopes are digital and so have more break points than the usual four-stage ADSR. You can even invert the envelopes. It’s this hybridization that makes the sound so unique. Oddly enough, although I bought it for its hoover potential I use it almost exclusively for strings and string-like pads.

Like the other Junos, the Alphas are pad machines. With their relatively complicated envelopes capable of unusual swells, buzzy pulse width, and chorus, these things were made for gorgeous, floaty pads. They also do brass and bass well. If I were to compare the Alphas to the other Junos, I would describe it as the cyborg version. It’s definitely identifiable as a Juno machine, and yet there’s something slightly more synthetic about it. At times, it reminds me of the Korg Poly-800, especially when doing organs. I’m a huge fan of the Poly-800, so take my praise here with a grain of salt if you are not. 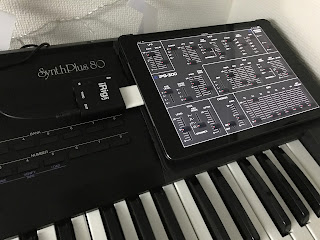 With the lack of dedicated sliders and knobs on the panel, editing parameters can be a chore although not impossible. Thankfully, I have an iPad and the iPG-800 app also includes a PG-300 emulator so editing is a breeze. Should you wish to forego an editor, there’s the alpha dial, which Roland calls “alluringly simple” in its sales brochure for the synths. I don’t know about that, but it’s certainly not terrible. Probably the one parameter you’re going to want to edit on the fly is cut-off, and Roland, anticipating your needs, has included kind of “macro” parameters accessible from the front panel, including tone modify, or brilliance. It’s not quite the same as tweaking the cut-off and resonance on a PG-300 but this isn’t a synth for screaming leads anyway.

The Alpha synths really are great. I don’t think I’d want one as my primary synth—the sound is too niche. But for someone who was doing, say, retro rave tracks it would be perfect, especially with its chord memory function. Actually, I’m tempted to get another just because they’re so cheap, especially here in Japan, where they routinely sell for less than $100. But that loft studio of mine is already packed, and then where would I put the JX-3P I’ve been hankering for?