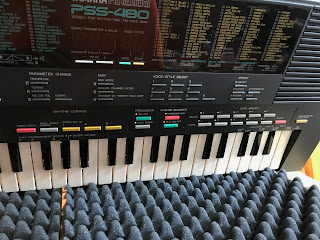 As I’ve said before, I’m not the biggest fan of FM synthesis. It’s not that I dislike it. I believe it has its uses, and there are some sounds it does better than anything else. But I never went through an FM phase like a lot of other people seem to have. I grew up in the ‘70s and ‘80s so I love analog synthesis. I consider a two-oscillator monosynth solo with plenty of portamento to be one of the finer things in life.

Recently, I have come to appreciate what FM synthesis can do. And while I’m still not a huge fan of six-operator synths like the DX7, take me down to four and watch me come alive. My TX81Z can do things no analog synth can do, and while I didn’t have it for very long, the DX100 was more than capable when it came to bass. Solid, even.

If four operators are better than six, imagine how good two operators must be. Sadly, this is not the case but two-op machines are capable of some pretty incredible sounds. From bells to falling cooking pan-like noise, it’s hard to beat a lo-fi two-op synth. My appetite was wetted by an SHS-10 that passed through the studio but I wanted more. Enter the PortaSound PSS-480.

Apparently the PortaSound line is fairly well loved by people of a certain age but I had never come across one before my 480 arrived in the mail. At only around $10, I figured it was a steal, and if I hated it, well, no big deal.

The PSS series is bewilderingly big, and it’s really hard to keep track of which model has what functions, but the 480 is a four-octave 2-op synth with midi and editable synthesis parameters. Obviously this is why I bought it. Preset FM guitar sounds are great and all, but being able to edit them on the fly is where the fun comes in. And edit you can. It has buttons for adjusting the envelope, feedback, frequency and modulation. The latter two can make things really hairy really fast. You can add portamento and vibrato, and even save your new sounds into what Yamaha calls “banks.” It also has crappy PCM drum sounds and cheesy rhythms but I really have no interest in that. I just want it to make noise. 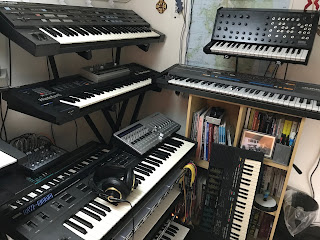 Unfortunately, my unit makes not only digital noise but unwanted noise as well. There’s a persistent high-pitched whine that’s audible from both the speakers and audio jack, using either batteries or a wall wart. It’s really annoying. Yes, I could EQ it out of recordings but it’s not very pleasant to listen to while playing.

I have read about people replacing the capacitors on power boards of synths and this cleaning up noise and other audio detritus in the output. So that’s what I did. I replaced all the capacitors (except the Mylar ones, which I was warned are there to provide a kind of high pass on the sound). The ones I ordered were a little bigger than the old ones so it was a little tough getting the board back into the machine, but I managed it by removing a speaker screw.

I gave up and bought a PSS-380. No more whine. No midi on the 380 and it can’t save sounds but it does have sliders, and I actually like the synthesis better than the 480. It’s dirtier. Hairier. Nastier.

Now I use the 480 as a portable midi keyboard for testing gear in my work area, which is downstairs from the studio. And I have two old PortaSound machines. I may not have fixed the whine but I still consider it a success.