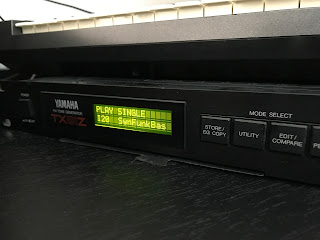 I’m not an FM guy. Some people love FM. It tickles their fancy. Not me. To me, it sounds sterile and sharp, like a scalpel. A highly polished scalpel dipped in antiseptic. Me, I prefer analog. It’s fuzzy and woolly and warm, like a forest animal. Or like a blanket. Or a hug.

Of course, I’m exaggerating but you get the idea. We all have our preferences and mine tend towards analog. I like the smeary softness of analog. It reminds me of my childhood in the ‘70s and growing up in the ‘80s. That would be the early ‘80s, before our lives were blackened by the coming of the dreaded DX7.

Of course, I’m exaggerating again. I may prefer analog but I’m also a fan of synthesizers in general, and there’s something to be said for having a variety of sounds at your disposal. The song needs what it needs. Also, digital sounds can be surprisingly easy to slot into a full mix. Surgical. Precise. FM.

My first brush with frequency modulation came a few years ago when a friend offered me an old DX7 he found in his storage shed. It could only whine and gurgle, so I thought the battery might be dead. I learned to solder and swapped it out successfully but the whines and gurgles—like a robot with a sinus infection—continued. Now I realize I probably just needed to reinstall the factory patches but at the time I was ignorant of the ways of the synth. I sold it to Hard-Off (real name) for a dollar but I always wondered how my music world would have been different with FM in it. 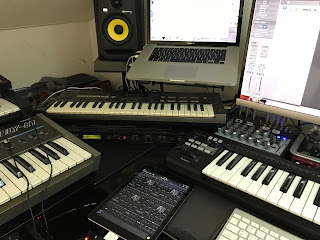 Fast forward a few years to the introduction of the Volca FM. The chance to finally get my toes wet in the FM pool had come at last. Like the other Volcas, I enjoyed playing it, and like the other Volcas, I soon sold it. It was too bright and brash for my music. I was used to the gentle glow of an analog sunset, and this was the digital equivalent of someone shining a flashlight in my eyes.

But still I didn’t give up. Somehow the name TX81Z kept working its way into my life, so I decided to check out some YouTube videos. I immediately liked the way it sounded. While the DX7 and other 6-operator FM synths were shiny and chrome, the TX81Z was more like burnished metal, brushed aluminum. There was a grittiness to it that I immediately fell for. I found one on Yahoo Auctions in good condition for $50 and haven’t looked back since.

Released in 1987, the TX81Z was Yamaha’s first FM synth to feature waveforms other than pure sine waves. Its eight waves (one sinusoidal plus seven variations) lend the machine a wooliness that you don’t expect (I don’t expect) in FM. It’s like it was made for analog heads like me. 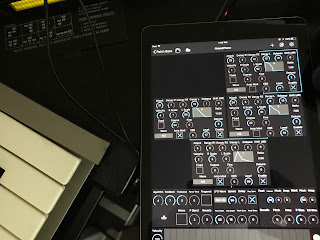 With its 8 voices, 8-part multitimbrality, and performance modes, it has plenty to offer. However, it’s still an ‘80s FM synth, which means it’s hard to program (for me, at least). The fact that it’s squeezed into a 1U rack unit doesn’t help matters either. However, as this is the 21st century, there are editors galore available. I’m using Patch Base by Coffeeshopped on the iPad, and while I can’t get the TX81Z to respond when I try to fetch patches, it works just fine going the other direction.

So does this mean I’m going to chuck my JX-3P out with the trash and go all FM? No, that to me is the equivalent of furnishing your house entirely with metal and glass. I need my comfy sofas and chairs to relax in. But as the occasional accent, there’s nothing wrong with shiny.