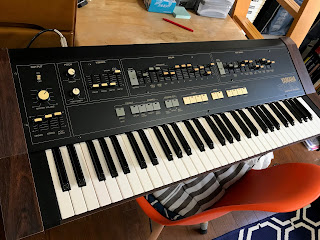 What is it with me and stinky stringers? After my debacle with a moldy Roland RS-101 you’d think I would have learned my lesson. But nope, here I am with another moldy string machine, this time a Yamaha SK20. Don’t worry if you’re afraid of more heartbreak though. This one has a happy ending.

Released in 1980, the SK20 was part of a series of “symphonic ensembles,” machines that combined organ, string, and regular synthesizer functions. The SK20 was on the lower end of the range, lacking the solo (monophonic) synth of the SK30, but still fairly robust with five octaves and seven notes of polyphony. With its half-matte black metal front, rosewood grain end panels and wooden base, and yellow and gray buttons and sliders, it looks very of its time, when instruments were made to look like furniture and 33 pounds (15 kg) was considered light and compact. 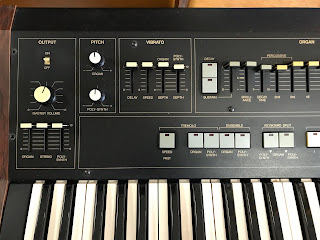 Although similar in appearance to the M-appended entries in the CS series, the SK units are less synthesizers than string machines. In fact, if you bought one of these lumbering beasts expecting snappy envelopes and zinging filters, you’d be pretty disappointed. These are basically the synthesizer equivalent of the waterbed: big and heavy with woozy, undulating tones that will instantly take you back to a specific place and time, when everyone smoked, orange was the color of choice, and fabrics were highly flammable.

The SK20 has three sections can be freely mixed together. Unlike other string synths of the time, it isn’t fully polyphonic though. You have to make due with only six notes, which is admittedly something of a shame. However, it sounds delicious, and when all three sections are combined it’s like listening to an ice cream sundae.

Although I’m not much of an organ maniac, the organ section is fairly famous, having been used by Sigur Ros for just this purpose. It has additive drawbars and sounds like an organ should, at least to my ears. The string synth is good as far as string synths go, although it’s not as lush as, say, a Solina. Lastly, on its own the synthesizer part wouldn’t be much to write home about, given the limited control over the envelope (just “slow attack” and “sustain” on/off buttons), but with liberal use of the filter—which sweeps nicely thanks to a dedicated ADSR filter envelope—and combined with the other sounds, well, you’d be forgiven for thinking that you hadn’t died and gone to heaven. 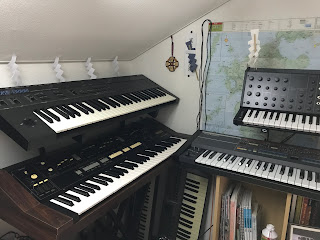 And we haven’t even talked about the effects yet. Of course, there’s an ensemble effect, which can be applied to both organ and strings/synth. It’s suitably lush although not as smooth as some. It does, however, have a gorgeous tremolo effect, which is meant to mimic a Leslie. It has two speed settings, slow and fast, and will actually speed up from the slow rate until it reaches the maximum rate, much like a mechanically spinning speaker would. If that’s not enough, it has a port for a real Leslie speaker. How cool is that? It also has vibrato, separate tuning knobs for organ and synth, a slider to change feet and waveforms for the synth, some presets, and more.

I won this particular SK20 on Yahoo Auctions for about $80, and while it powered on and sounded pretty good, its appearance left quite a bit to be desired. Frankly, it looked like it had been sitting in a stagnant pool of water since the first Bush administration. The half matte front was mottled with dirt, and the spaces between the keys were actually muddy. But the worst was the smell, a putrid, moldy funk that penetrated to the bottom of your lungs. As someone with asthma brought on by an allergic reaction to mold, this was a nightmare come true, and the same reason why I had to throw out the RS-101. But I didn’t want to have to go through that heartbreak again, so I vowed to clean it up by hook or by crook. 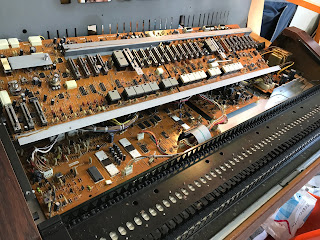 After opening the windows for ventilation, I started with the outside of the dirty beast, wiping the body down with a rag and water. It helped a little but given the slightly uneven surface of this thing, there was still plenty of dirt and grime left when I finished. I decided to try a little alcohol. I poured a little onto a fresh rag, tested it on the side to make sure it was OK, and then cleaned the whole exterior. (Always remember to use gloves and wear a mask when working with alcohol and other chemicals. I burned the inside of my nostrils in my cleaning fever.)

It was looking better but still had a long way to go. This poor thing. Had it been sitting in a potting shed instead of a studio where it belonged? I had recently picked up some microfiber cloths from the hundred yen store so I thought I’d give them a try. I soaked in some warm water and added a drop of dish washing detergent. Well, that did the trick. The microfibers really got down into the tiny crevices of the matte and got that dirt right out. It took a long time, with quite a few passes and quite a few cloths soiled, but in the end it was looking pretty good. 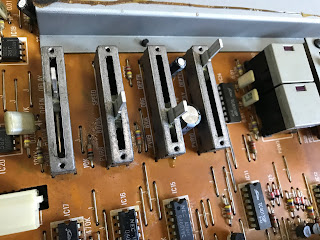 Next, I popped off the knobs and slider caps and threw them into the sink to soak in some warm water and detergent. I pulled out all the keys and dropped them into the bath too. While they were soaking, I turned my attention to the keybed, which was dustier than the floor behind a bookshelf. There were so many dust bunnies I could have opened a petting zoo. The vacuum cleaner took care of that mess, as well as the dust and bits of junk that were clinging to the inside of the machine, stuck in the corners and all over the circuit boards.

I was getting closer to the source of the smell now. The face of the SK20 is made of metal but the body is all wood, and that’s where mold likes to live. The inside bottom is covered with a metallic silver paper, and in the corners and sides it was all discolored. Using a solution of water and bleach with just a drop of detergent, I scrubbed the inside, making sure that the bleach solution dripped into the cracks and corners of the wood so as to kill any mold hiding there. I also wiped down the outside just to be sure.

There was a fine coating of dirt and grime on all the boards inside as well, so using alcohol and an old, soft toothbrush, I scrubbed everything down. I have since found out about contact cleaner spray (not DeOxit), which I’ve had good results with on other synths. The SK20 is looking pretty good now, although I might want to give it a pass with contact cleaner in the future. 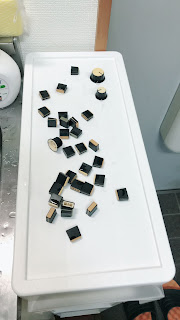 To make sure all the mold was good and dead, I set the SK20 out on my veranda in the hot Tokyo sun to dry for 5 or 6 hours. When finished, the mold smell was gone. It still smells like an old dog, especially when it’s on, but at least it doesn’t smell like a dead dog anymore. (And actually using an odor eater device in my studio has helped a lot.)

Now that the knobs and keys had been soaking for awhile, I scrubbed, rinsed and dried off each one. They were really looking good now, although I could see that the plastic on the knobs had yellowed a bit. No worries though. I cut out some felt to replace the black acrylic dust shields that been sitting on top of the sliders. I didn’t do a very good job, though, so I’d like to try again with a thicker material. I also need to get some felt back onto the tops of the keys.

Lastly, I tried a little DeOxit and Fader Lube in the dry and raspy silders. They’re still raspy so they may need to be rebuilt. The DeOxit cleaned up the filter envelope slider though, which was so dirty it sounded like a sample and hold circuit.

The SK20, which I had been calling Stinky Boy, is looking much better now. I have it up in my studio and it’s really working well with the rest of the gear. It has such a sweet sound, and when run through a Small Stone clone phaser pedal it really comes alive. I’d still like to do a little more work on it, but it’s dandy for now.