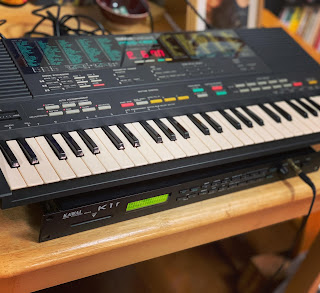 Even the most casual reader of this page will have realized that my tastes skew towards the analog. However, I’m not an analog purist. Like a chef, I prefer to have a variety of spices at hand with which to season my music. (Can you tell I just ate lunch?) So to that end I have a Yamaha TX81Z and Korg DW-8000 in my kitchen. Erm, studio. Add to that now a Kawai K1r.

Actually this is the second K1r I’ve owned in my lifetime. The first one made a brief stop in my studio in the early 2000’s when I was searching for a new sound. I eventually settled on breaks made in the box but before jettisoning all my studio gear (yes, I do regret it) I remember managing to get not very much useful out of the K1r except some weird digital pitch-bent gurgles.

So why did I buy another one? A couple of reasons. First, I want all the synths. Not very realistic but it’s true. Second, I used to own one and I’d like to get the old studio back together. Third, I had a Yamaha TG33 for awhile and I really liked the sound of it. Although I sold it, I still wanted a PCM vector synth for my studio. And four, I found one cheap on Yahoo Auctions. 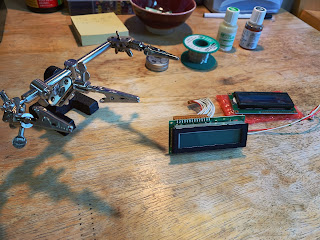 Sharp readers will have already realized that I bought the version of the K1 without the vector joystick. What I really wanted was a K1m, the desktop module that looks a bit like the TG33’s little brother. But those don’t go for nearly as cheap as the K1r, especially a unit with a crappy LCD screen. But more on that in a minute.

The K1 series uses 8-bit PCM waveforms, including samples of acoustic instruments, percussion, and additive waves culled from the K5. It was intended to be a direct competitor to Roland’s D-50 and as such was priced much lower, even lower than the D-10, apparently. Although the K1 got favorable reviews at the time, these days it tends to be ignored because of its low resolution. This is, of course, exactly why I wanted it. Although it’s trying its best to be a slick, professional pad machine like a D-50, it just hasn’t been blessed with the technology. And thus, in my mind, has tons more character.

It also has a vaguely nostalgic sound for me. Maybe it was used on lots of late-80s industrial records or soundtracks, because playing some of the pads (particularly the Ahh patch) puts me straight into a reverie. Although I’d love to have a joystick and an editor to get the most out of it, it’s satisfying to use it even just as a preset machine. 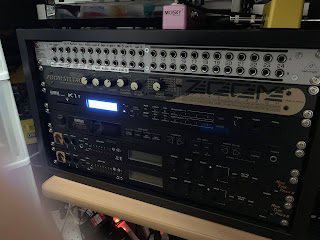 But, given its low price, it did need some work before it could be slotted into the rack above the TX81Z. The first order of business was the battery, which of course needed to be replaced. I’m not a huge fan of rack-mounted synths but the small, box-like size does it make it easy to work on. None of those nested PCB boards that require hours of disassembly just to reach the battery. This was swapped in and out lickety-split.

Next was the LCD screen. The backlight was plenty bright but the viewing angle had somehow gotten off. Much like a Michael Bay movie, there was no good way to view it, and seeing as it was in a rack down by my knees it was almost impossible to get anything done. I ordered a pack of some random 16x2 HD44780 LCD screens. Thankfully, because the backlight inverter was still working quietly (unlike on my Roland Alpha Juno-2), I was able to use the backlight power line for the new screen. I ran power to the two side pins. Brightness was fine from the get-go so I didn’t need to worry about adjusting contrast, which is lucky because I don’t think the K1r has a contrast pot anywhere. The screen was even the same size and slotted right in, unlike with my Korg DDD-1. What luck. 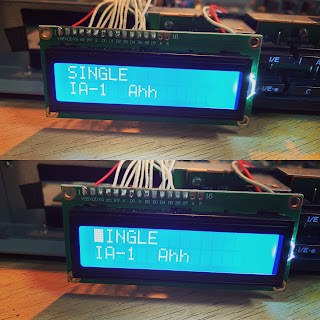 I’m not really an expert on LCD screens but it looks like you want to line up the wires so they go from 1-14. I believe 1 is ground for the character display, 2 is +5V power for the display, and 3 is contrast. After that it gets a little hazy. If you’re using the two side pins for backlight power, you can ignore spots 15 and 16. Or you can use 15 and 16 to power the backlight (15 is the anode, or positive voltage, and 16 is the cathode, or ground).

After getting it all back together, I tested it out and saw that every time I pressed a key, the first character completely whited out. Was it a short? Given my sloppiness with working with wires, I figured this was likely the case. I pulled it all apart, uninstalled the screen, undid all the wires, cleaned them up (there were a few small, wayward strands poking out), redid it, got it all back together, and the same thing happened. What was I doing wrong? I asked about it on a Facebook group and someone pointed out it might be a MIDI note indicator. I looked up K1r demos on YouTube and sure enough, that’s exactly what it was. I had never noticed before because the old screen was so terrible. But hey, it works and I got some good practice working with wire.

Now that the screen is readable I might even try programming the K1r. I’m intrigued by the amplitude modulation. Apparently the vector position can be controlled by midi editor so I’ll have to look into that as well. K1r, welcome to the studio.