Roland Alpha Juno 2 - The Mystery Of The Whining LCD Screen 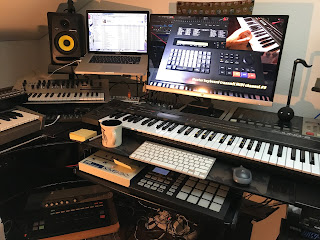 Eagle-eyed readers of this blog may remember that I had a Roland HS-80 SynthPlus 80, the home version of the Alpha Juno 2. I took the speakers out. But I also really liked the look of the original Juno 2. With its slim body and membrane buttons, it just exudes mid-80s cool. I had been wanting a new master keyboard to replace my Roland A-49, so after seeing YouTube star Espen Kraft using one I decided to sell off the HS-80 and get an Alpha.

It arrived clean and in good shape, and even came with a plastic hard case. Nice. However, I sometimes noticed a faint, high-pitched whine coming from inside the machine. It wasn’t present in the audio but was definitely audible when I put my ear near the casing. But then it went away and I forgot about it.

The Alpha Juno 2 was originally released in 1985. The younger brother (in age, not size) to the Alpha Juno, the 2 added an extra octave and touch sensitivity, something that makes it a great master controller even to this day. Unlike the Juno-106, which it replaced, the Alpha synths have very few sliders, making do with just buttons and the alpha dial for editing. Not great but also not a deal breaker (and I use iPG-800 on the iPad to wirelessly edit anyway).

The Alpha Junos don’t get nearly as much love as the earlier Juno machines. The lack of sliders is part of that, but the sound is distinctly different as well. It’s a bit more clinical than the older Junos, a bit more precise. That being said, it has plenty of pluses, including some unusual waveforms, like pulse width sawtooth waves, and robust envelopes for volume and pitch, which make it perfect for hoovers and other unusual sounds.

To me, the debate of which is better isn’t even worth having. It’s different than a Juno-106 and thus you need both. End of debate.

I was really enjoying my Alpha Juno 2, both as a synth and master controller, until it came back. The WHINE. High-pitched sounds drive me crazy. Maybe I have sensitive hearing. Or maybe it’s because I have tinnitus. But I just can’t ignore it. And this was getting louder and louder.

I dealt with a whiny LCD screen once before when I replaced the screen in my Korg DDD-1 drum machine. I assumed that this would be similar: swap out the screen, no more whine. I decided to buy a replacement LCD screen from Syntaur because I’m lazy and didn’t want to deal with putting in a modern backlit unit. That would involve tapping into 5V somewhere to power the backlight and I didn’t feel like an adventure. Plus, truth be told, I’m not a huge fan of the bright blue screens. Sure, they’re easy to read but they’re pretty garish. 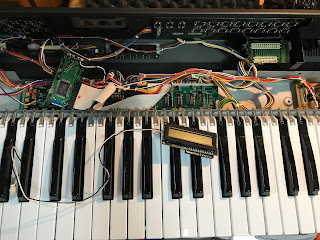 I got the Alpha 2 all apart, unplugged the old LCD, put in the new one, and it whined too. What the. I swapped them back. Whine. Tried the new one again. Whine. But at a slightly higher frequency. Weird. I tried leaving it on for awhile to see if that made a difference. The whining became fainter over time but it never fully dissipated. And, I now noticed, there was an additional whine coming from near the power transformer. The transformer on the HS-80 made a bunch of noise but that was lower and from vibrations, not this annoying mosquito hum.

Well, bummer. Could it be that Syntaur sent me a bum screen? It seemed like pretty bad luck but I figured I may as well try to return it. After going back and forth in email a few times, they decided they would not take it back as the fault was likely in my backlight inverter. Aha, what’s this? This is an electrical part I haven’t encountered before. I thanked them for their time and got to googling.

It turns out that there’s a section on the power board that provides power for the backlight on the screen and that this can develop a whine over time. In fact, there are plenty of posts about this online. Most then go on to describe how to install the new garish screen and disconnect the inverter.

Wait a minute. If the inverter is only for the backlight but the rest of the screen will still get power without it, what if I just disconnect the inverter? It’s not like I do a lot of producing in coal mines or caves (nor do I play live). I unplugged the two wires that ran to the power board and the screen carried on dutifully displaying characters, just minus the cheery glow. So I clipped out the resistor in the inverter, closed it up, and can now do my producing in a blissful, whine-free environment.

I do still have that extra LCD screen though. Anyone need one? Barely used.