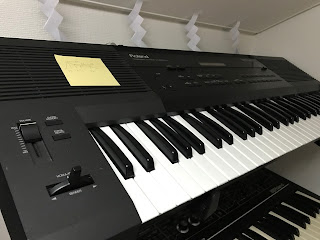 It was time to change the tactile switches in my Roland HS-80. It wasn’t in terrible shape but a few of the numbers were getting a little unresponsive, like the button equivalent of a cashier at the corner store more interested in their phone than your purchase.

Looking around online, it was hard to find out just what tact switch was going to work. The HS-80 is the home version of the Alpha Juno 2, which uses two different kinds, one for the membrane buttons and another for the push buttons. But the HS-80 only has one kind—the push kind. So I cracked it open to see what I was working with. 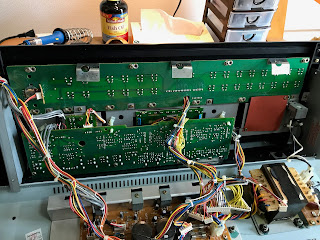 The HS-80 uses the 5mm tact switches exclusively. This is the same switch in the Juno-106. As I’m also working on a 106 restoration, I bought a big bag of switches on Wish for like a dollar. It was my first time using Wish so I wasn’t expecting much, but they were the right size and ended up working beautifully. Very tight and responsive.

I undid all the screws and metal ground shields, disconnected the cables, and swapped out the switches. There are 32 of them so it’s no small job, but maybe not very much different from other 80s polysynths. Don’t forget to do the two on the bender board as well. 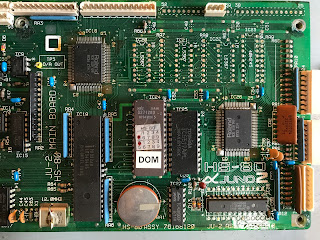 Since I had the thing open I figured I’d change the battery too. A quick test with the multimeter showed it was still at full power but better safe than sorry. Sometimes internal batteries are connected to the board via convenient and easy to reach solder pads, like the Poly-800 (assuming you have solder pads at all). Not the HS-80. The board has to come out to get at the solder points underneath. And that means the keyboard has to come out as well.

When changing internal batteries, I’ve read it’s best to clip off the legs first and then desolder. That way heat isn’t transferred to the battery and it won’t explode. You probably don’t want things exploding in your face, especially when you’re holding a hot metal rod. I was able to get the new battery in easily enough. Sometimes you have to get creative with the legs to make them fit the hole configuration. But this one was easy. 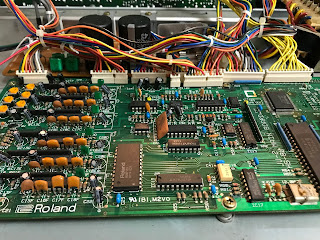 I took a break for lunch and when I came back I realized that I had boards and cables all over the house, with a very empty-looking synth sitting on the table. Thankfully I had taken lots of pictures with my phone, so I was able to get it back together without much trouble. I did swap two cables but I caught my mistake before I powered it on. (Once I managed to get the keyboard cables reversed so the low keys started at middle C. That was momentarily confusing.)

I turned it on and it was indeed working. Success. Because I changed the battery, I assumed that the RAM sounds would be gone, like with the JX-3P. I was planning to attempt a SYSEX dump via a MIDI handshake, something I was not looking forward to as I had never really had much luck with that. But to my delight, there were my presets, including my cosmic chorus pad Carl Sagan, and a manually entered What the.

It’s nice when everything works correctly. There’s nothing worse than mashing buttons to get a sound to appear when you’re in the heat of creation. Yes, spending half a day changing tact switches on an HS-80 isn’t as fun as making a new song, but it is necessary, and there’s something zen about the whole thing. There’s so much distraction in modern life that it’s nice to spend a few hours thinking about nothing other than the task at hand.