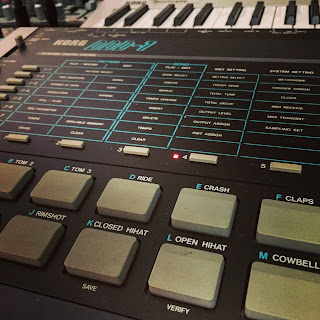 I’m not a huge drum machine guy. Some people love them and have giant collections. I like them alright and have owned my fair share in my life. I started with an Alesis HR-16 in the late 80s. In my acid house days I owned a TR-707 and later a 606, as well as a Maestro Rhythm King that I bought for like 20 bucks when no one wanted those old things.

These days it’s easier to just load some samples into Maschine Mikro or even just drag and drop them directly into Logic. I can’t be bothered to pull out a box, plug it in, program a beat, etc. When I’m composing I’m moving fast, and I don’t have enough room to have drum machines permanently set up and plugged in. With one exception. My Korg DDD-1.

The DDD-1 was Korg’s flagship drum machine in 1986, a 12-bit digital behemoth that was meant to compete with the other big machines of the time: your DMX’s and Drumtraks and Yamahas. It had 18 drum sounds with room for expansion courtesy ROM cards, velocity sensitive pads, stereo panning, even sampling if you had the extra board. All that firepower didn’t come cheap, and it retailed for something like $1000 in 80s money ($2200 in 2017). Keep in mind though that this was considered affordable at the time. Incredible.

So with all of this amazing tech on board, why isn’t the DDD-1 as revered as the 808, 909 or Linn Drum? Well, the sounds are very 80s. And not timelessly 80s like a Linn but mired in the 80s like a Yamaha RX5. Which means it should be ripe for a synthwave comeback. But the upshot is it’s not popular so it can be had for cheap and if you like digital 80s drums you really should check it out. It’s punchy, the kick and snare have weight and heft, and the clap is incredible. OK, most people hate it because it sounds like someone crumpling up a piece of paper but that’s exactly why I love it. 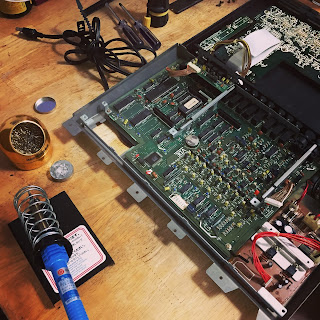 I found one on Yahoo Auctions for maybe a little too much (the guy was really happy that I bought it) and there didn’t seem to be anything wrong with it, but it wouldn’t save patterns and so likely the internal battery was dead. These were early days for my DIY gear repair and I made a real mess of changing out the battery. The hardest part was the legs on the new battery were spaced differently than the board, so I had to bend them to get them to fit. They’re not meant to be bent so much and so of course I snapped a few off trying to get it to fit. I eventually got it in and was incredibly pleased when it booted up correctly and saved my patterns. These days instead of wasting time bending the legs I would just solder in an extension but I was intimidated by working with wire at the time. Little did I know I’d soon be getting a crash course in wire soldering.

Seemingly weeks after changing the battery, I was crestfallen to realize that the obnoxious, high-pitched whine that had been driving me crazy in my studio was coming from the DDD-1. At first I thought it was the power supply but after talking with a friend I realized it was probably the LCD display. It certainly looked OK, and the sound wasn’t interfering with the audio, but that keening was just too annoying. I had to do something. 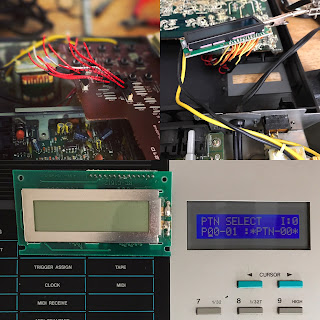 I took a chance and ordered a new screen online. They don’t make the same ones anymore so I bought a generic 16 x 2 back-lit blue screen and got to work. Of course, you can’t just plug and play (like I had hoped), you have to solder wires directly to the board of the new one. And don't forget they have to be connected to the old wires coming from the PCB. Again, for the 2018 me this would be no big deal but for the me of the time it was quite a job. The actual soldering wasn’t so hard once I got the hang of it. No, the hard part was stripping the wires so that the outer sleeve came off without taking half the wire with it. My father once told me you need the right tool for the job, and I have since come to learn that this is half the battle of any undertaking. I didn’t have the right tool and so it took forever and was really frustrating. But in the end I got it all wired up and it actually worked. And the whining had stopped (from both the drum machine and me). Hurray!

The next problem was getting it aligned in the window. The new screen was too big to fit the guides and so I had to wedge it in and use just a few of the screws (lightly tightened) to hold it in place. I say hold but it was more like cajole. Convince. Plead with it to stay put. Jar the machine and it’s coming right out. But it just sits still on my desk and isn’t used in a live situation so it’s fine for now.

The DDD-1 is still going strong and sits pride of place on the studio desk, even if I don’t use it very much. I’ve since added in a DDM-110, which is even crunchier at 8 bits, and I wouldn’t mind a DDD-5 although I’m not paying more than $20 for one. Also, I’ve learned my lesson and I now have a decent pair of wire strippers. So I guess I really should change out that damaged screen in my CZ-101.