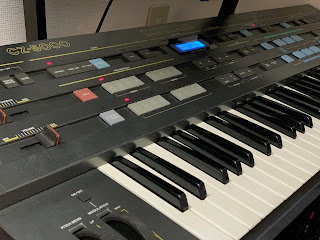 The last time I had my poor, battered CZ-5000 open, I tried to change the signal relay, a small component usually found in consumer electronics to suppress the thump sound heard at power-on. These are known to go bad in the CZ range, and can apparently cause all kinds of interference in the audio signal, from distortion and pops to volume drops and more. My machine was experiencing all these things, including an excessive amount of noise when moving the chorus slider. The signal relay drop-in replacement that I bought on eBay didn’t work so I cleaned the old as well as I could, re-installed it, and declared it fixed.

Well, that didn’t last long. I fired up the CZ-5000 recently to install some patches I found online and was disappointed to discover that my “fix” was no longer working, and all the horrible noise had come back. It was time to address this issue permanently. And, while the machine was open, I figured I may as well replace the old LCD screen, which had a column of bad characters. 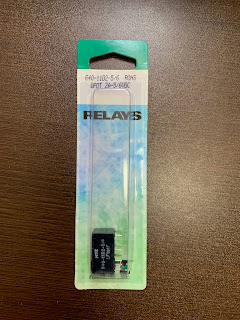 I found a link to an online store that carries the correct signal replacement (via this helpful site) and when it arrived, I was surprised to see it packaged for store display in a blister pack. Turns out I had ordered it from an audio supply company. They even sent me a catalog with fun-looking disco lights and mobile DJ supplies.

After hefting the CZ-5000 down from my loft studio, I got it open and soon had the relay signal swapped out. I plugged in some headphones to check and heard nothing. I was just about to start tearing the place apart when I realized that the volume was turned all the way down. Oh jeez, I wonder if that was the problem the first time. No, it can’t be. I’m not that stupid, am I? Don’t answer that.

Volume issues solved, I held down a C major chord and was treated to a gorgeous blast of clean, unadulterated phase distortion brass patch. Hallelujah. After half a year of dirty signal, it was glorious to finally hear what my CZ-5000 could do. The chorus noise had cleared up as well, although there was the occasional pop at the chorus off position. Perhaps I’ll change that slider someday. 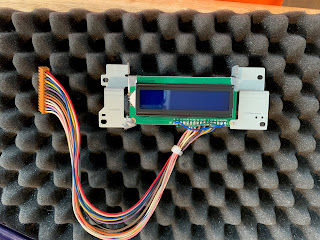 Next was the LCD screen. I still had a bunch left over from when I did the K1r. The K1r had a functioning backlight inverter to power the screen though. The CZ-5000 has no backlight, just a dark screen that, unless you’re at a direct viewing angle in a well-lit kitchen, is really of no use to anyone. What to do.

I found a site online that documented a similar screen swap, so I followed its instructions with pretty good results. The basic idea is that you use a jumper wire to steal +5V from pin 2, which powers the screen itself, and send it to pin 15, which is for the backlight. Another jumper wire can connect ground from pins 1 to 16. I was able to use the original wires for the old screen and just solder them directly to the new screen (pins 1-14). For the jumpers, I used some wiring I had at hand. I made sure I was clean with my wire trimming. The jumpers occasionally shorted but if I left it alone, it worked OK.

The first time I fired it up I was shocked because I couldn’t see anything except 32 white squares. I realized the contrast was probably way too bright. Then I noticed a trimmer pot soldered to the main PCB close to where the wire connecter plugged in and figured it was probably to adjust contrast. I was right. I soon had it at the perfect brightness. Thanks, Casio! 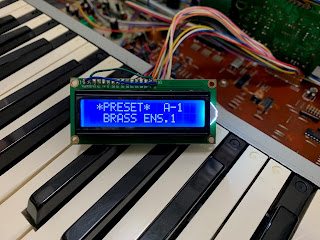 Getting it to fit in the bracket was a little harder. The new screen was a bit smaller, both in length and width, than the old one, so I had to improvise with some stiff wire to hold it in place. I got it all installed, closed it up, turned it on, and it was upside-down. God damnit. I really should be more careful about these kinds of things.

I took a short break to clear my head and then took it out of the bracket and re-installed it the right way up. It fit a lot better this time (gee, what a surprise) although I did still have to use some wire to get it straight. I also made sure to cover the bracket with duct tape just to dissuade it from shorting on me. I got it all back in and now it works and looks great. Amazing what a simple thing like a new LCD screen will do for morale. 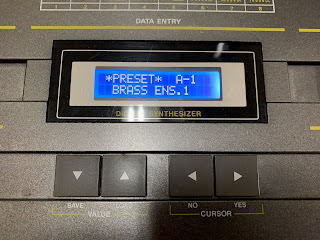 Now that I can hear (and see!) the thing properly, I really am impressed with how the CZ-5000 sounds. I had a CZ-101 before so I knew what to expect. Maybe it’s the chorus. But man, does this thing sound great. I have Patch Base for my iPad, so I’d like to get into programming. I also have Sysex Base, which I’m using to load sounds. I downloaded a bunch from the internet and also bought some from Czounds, which I love. I also feel like I should try programming it with the buttons. After all, I did spend kind of a long time changing them all. And then there’s that manual sequencer, which is apparently unique and fun. Lots to explore now that I finally have this poor old thing working well.