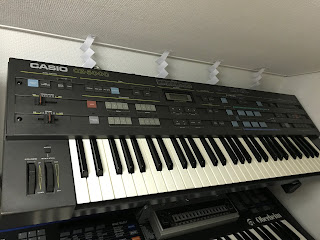 Boroboro is a word in Japanese that means junky. When I opened up the box and first saw my CZ-5000, that’s exactly what I thought. Ugh, boroboro. The paint was worn and faded, there were scratches in the silk screen lettering, the screws were all corroded, and it had two or three large stickers plastered to the front, as well as a few other places where stickers had been improperly removed. It was also missing its volume and chorus slider caps. I paid $200 for this?

Sometimes I get a little carried away bidding for things on Yahoo Auctions. “Wow, that’s a good price,” I think and then in my synthesizer fever I tend to not inspect the pictures as well as I should. I had no memory of all those stickers in the posted images but I went back and checked and they were indeed there. I could try to place the blame on the low-res pictures Yahoo Auctions uses but really this was all on me. Live and learn.

I had wanted a CZ-5000 for awhile, ever since I first got a CZ-101. I love the Casio phase distortion sound. It’s digital and yet different from FM. I particularly like it for strings, pads and effects. And, seeing as I had recently sold my 101, it was time to bring PD back to my studio. Plus I liked the idea of adding chorus to the sound. 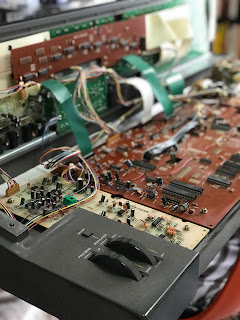 Thankfully the thing made noise so most of this would be cosmetic work. As per usual, I gave it a cleaning with a microfiber cloth. It was starting to look better but still had a long way to go. I’m pretty sure I pulled the keys out and washed them individually as well, although I’m not positive about that.

Now, those stickers. The best way to remove stickers is with warm, soapy water and your finger nail. It’s time consuming but the safest way. There will still be paper and glue stuck so next spray some WD-40 in a paper towel and lay it over the area for a few minutes. The remaining glue should come right up. This will also work on old, dried glue as well. Don’t rush it and start scrubbing though. If it doesn’t clean up on the first try, do it again. You could end up scraping off the paint, like I did on the bar under the keys. I had to spray paint the whole thing. While you can’t see any difference in my dark studio, in the light you can clearly see that the painted area isn’t as shiny as the rest of the paint.

Next, I bought new screws and painted the heads black. I didn’t bother with the ones on the underside, but the front and rear screws look a whole lot better now than they did. Lastly, I was able to get two slider caps from a friend in the UK. They’re actually CZ-3000 caps but they fit and look fine.

With the outside taken care of, it was time to address the inside. As I spent more time with it, I began to realize it was going to be a slightly more involved job than I thought. But hopefully not too taxing.

The factory presets were all present and accounted for but the banks of user sounds were empty so I figured the battery was dead. A little sleuthing revealed that the CZ-5000 uses standard AA batteries to hold user sounds, and the battery compartment is on the underside of the unit like on a regular, small Casio keyboard. I removed the old batteries and while they were starting to get a little ripe they hadn’t ruined anything. Once new batteries were installed and I had completed the reset, duplicates of the factory presets appeared in the user memory banks as expected, and remained when turned off and on. 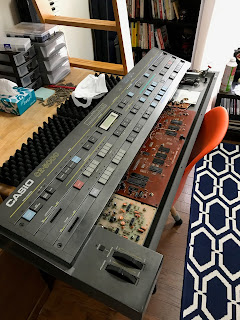 Unsurprisingly, the tact switches were starting to go, and so I turned my attention to replacing them next. In case you haven’t noticed, there are something like 84 tact switches on a CZ-5000. That’s a ridiculous amount of buttons. But they weren’t going to change themselves so I got down to it. I soon realized that while my new switches fit the holes, they were a hair short for the buttons, so would require extra pressure. Well, there was no way I was going to replace them all again so it would have to do.

The screen has a dead line, so I really should replace that at some point. I tried checking for dry joints but that didn’t seem to be the issue. It’s legible so I don’t really want to pay $50 for a replacement, and if I change it I really should put in a back-lit screen anyway. Maybe someday. Lastly, the headphone jack is still a little iffy, but I rarely use headphones directly so I’m going to leave that be for now.

The volume and chorus sliders were pretty noisy so I gave them a few liberal squirts of DeOxit. Actually quite a few, repeatedly. The volume slider had soon quieted down but the chorus one was still noisy. I realized that the cable for the chorus kept popping out of its board every time I removed the top panel, but even when connected it was popping and hissing like a sparkler. It didn’t help that the output jacks were dirty. Cleaning them with card stock soaked in DeOxit helped but the sound was still surprisingly bad. I cleaned out the inside of the machine as well with circuit board cleaner. I wouldn’t be surprised if someone had used this poor thing as a planter.I'm pretty sure I had to wash all the keys as well. 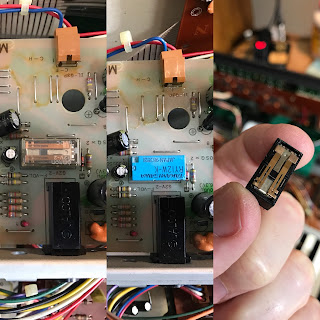 It was when I noticed volume drop-outs that I remembered that the CZ series can suffer from bad signal relays. The signal relay suppresses the loud thump that happens when you turn the unit on. I guess they can go bad over time. I ordered one off of eBay that claimed to be for the CZ series, and when it arrived I soldered it in. Nothing. Complete silence. I saw online that some people have had good luck cleaning the old relay, so I popped the plastic top off and used some card stock and DeOxit again to deoxidize the contacts. I took the bad one out, re-installed the old one, and it worked fine.

It’s really nice having a working CZ-5000 now. I use my iPad and Patch Base to program it (the CZ-101 editor works with the 5000 as well), and it’s nice being able to layer two sounds together. The sequencer is pretty complicated and I’m still not entirely if it doesn’t work properly or I just can’t figure it out, but I’m not really an on-board sequencer kind of guy anyway.

So welcome to the studio, Boroboro CZ-5000. I know you have a lot of life left in you. I’m excited to see what you can bring to my music.