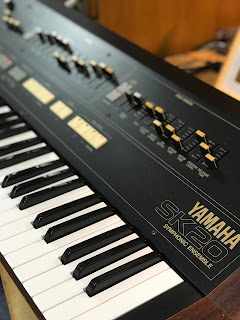 I thought I’d take another crack at Stinky Boy a.k.a. my Yamaha SK20 Symphonic Ensemble. He’s been doing great but I still had some unfinished business to take care of. And truth be told, he still hadn’t completely given up his old synth smell.

I dragged all 33 pounds (15 kg) of him down from the loft studio and popped him open. (I have to say, they really designed synths for ease of maintenance back in the day. Just a few screws and up pops the control panel. Even the keyboard is on hinges.) My plan was to rebuild the sliders, change the tact switches, redo the terrible dust covers I had put in temporarily last time, replace the strip of felt from the top of the keys, and address the smell.

I recently finished refurbishing a Roland SH-09 (which I hope to write about soon) and part of that involved rebuilding the sliders. There were only 10 and it took all day, and it really didn’t make a huge amount of difference. So instead of spending a lot of time on the SK20’s 29(!) sliders, I just decided to squirt some DeOxit Fader Lube in and be done with it. They weren’t that bad off, really. Likewise with the tact switches. They were inside individual plastic housings and although I couldn’t see the actual switch part, from looking at the underside of the PCB they appeared to be rectangular, which I had never seen before. This says to me they’re proprietary or at least not made anymore, and no vintage parts stores seemed to carry them. So I popped off the buttons to give them a clean and spritzed some DeOxit into the housing just for fun.

I had recently picked up a roll of stiff acrylic felt, which was a lot stronger than the junk they sell at the local hundred yen store. I cut out some sections and made new dust covers for the sliders. I also made sure to glue them down to the rails that hold in the control panels, something I forgot to do last time. Yes, they were moving all around. Pretty junky. I also glued down a long strip to cover the top of the keys where they meet the top panel. It looks so much better now, and not like the synthesizer equivalent of a car up on blocks in someone’s front yard.

After snapping back on the now clean buttons, and giving the slider caps a good scrub with a soft toothbrush, everything was looking good. There was the lingering smell though. The mold had not come back, thankfully, but there was still that old dog smell, especially when the SK20 was turned on. I sprayed some generic contact cleaner all over the boards under the keyboard, which were the dirtiest in the machine. Although I had cleaned them off pretty well before, there was still some dust clinging to the surface. That helped a lot.

Lastly, I’d been using a deodorizer in the studio to try and suck up the smell. In just a month or so, it had been drained almost completely, so I put in a new destinker cartridge and set it on edge of Stinky Boy. Another few weeks and I’ll have to give him a new nickname. Maybe Heavy Boy?