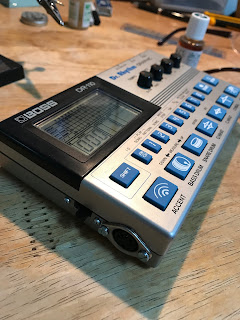 Learning how to fix and mod gear has been good for me. Not just because I get to enjoy using the instruments once they’re finished but because it’s helped me get more comfortable with failing. No one likes to fail but it’s precisely by screwing up that we can actually grow and learn. The first time I attempted this Boss DR-110 Circuitbenders din sync mod I screwed up and killed it. This time, I didn’t.

The DR-110 is a lovely drum machine. Much like a poor man’s TR-606, it has a wonderfully buzzy and metallic sound. And, unlike the 606, it has a clap. And what a glorious clap it is. Maybe the best clap in all drum machinedom? Maybe? It also has a positively bouncy swing to it. I like it almost as much as the 606, and even more on some sunny days. I can’t say enough good things about it.

Unfortunately, it’s pretty difficult to use this gorgeous sound in your songs unless you use it as a master clock because there’s no slave sync. No MIDI, no din sync, not even just plain clock sync. And Logic, my DAW of choice, seemingly won’t work as a slave. So that’s it. Game over. Time to cry and shut the 110 in a drawer, right?

Not so fast. Circuitbenders to the rescue.

The UK modders make an add-on kit that brings din sync slave functionality to your 110 so you can use it just like you would a 606. Additionally, the pattern will helpfully reset to the beginning when you press stop on the DAW, just as you’d want it to. (Apparently this doesn’t happen in some mods.) I was sold.

This was to be my first mod. I was confident. I had done quite a bit of work on other gear, and this didn’t look too complicated. I followed the instructions. I did everything right. I killed it.

Instead of holding onto the maimed drum machine and trying again later, I threw it away. I couldn’t stand the shame of having failed. I did, however, keep the mod in the hopes that someday my skills would improve enough to try again. 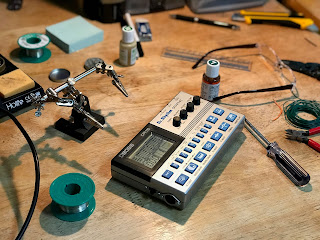 That day had come. I learned a lot adding the Moog Slayer filter mod to my Poly-800, and during that festival of shorts I realized that what killed the DR-110 was sloppy wiring on the switch and din socket. This time I would make sure the wires were trim and clean, with no opportunity for electricity to short between the solder lugs.

I followed the directions again, and aside from a little bit of trouble with the drilling, I managed to get everything installed pretty quickly. I was careful with the wires and proud of the job I did soldering them to the switch and socket. I double-checked my work, made sure I had indeed cut the fourth wire on the ribbon cable connecting the upper and lower boards, inserted the batteries, turned it on... and it played properly when I pressed start. So far so good. I took it upstairs to the studio, connected a cable from my Korg KMS-30 to sync it to my DAW’s clock, and it started up and stayed in time. By God, it worked.

I’m not ashamed to say I cried. It was such a relief to have it work. And now I could sync it to my DAW’s tempo. Happy days.

Bolstered by this success, I bought the Lil Erebus kit from Dreadbox. It’s now sitting in a drawer, dead, waiting until the day that I have acquired enough experience to get it to work. That day will definitely come though. I have no doubt about that now.