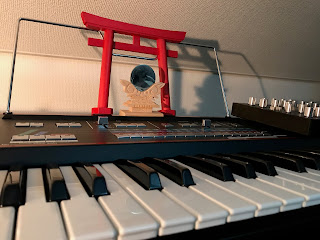 This is hard to write about. Not because I’m embarrassed or anything like that. It’s because it’s hard to put spiritual experiences into words, especially when they relate to the creation of music and the subconscious. But I shall try.

I live in Japan. I currently live in the megalopolis of Tokyo but I spent three years in a small town in the mountains of Kyushu. Japan is dotted with shrines and temples, and this is much more true in the countryside. It’s especially true in Kyushu, where the native religion of Japan, Shinto, likely began.

Shinto is an animistic belief system that assumes that everything has a spirit—you, me, trees, rocks, mountains, even the inanimate objects we make and own. And that includes synthesizers. It’s sometimes called a nature religion, and that’s also true, but I think it’s more about living in harmony with your environment, and whatever may be in it.

Although Shinto and Buddhism (Japan’s other major religion) play a large part in the lives of the people here, most Japanese will say they have no religion. It’s part of the background of daily life, and as an atheist with a distaste for organized religion, this suits me just fine. I particularly like Shinto because there’s no dogma, no rules. You can engage with it as much as you like, or not at all.

Since I started coming to Japan, I have been fascinated with Shinto. I feel a presence on shrine grounds, a power that is both comforting and a little intimidating. While meditating, I have communed with Shinto spirits, and they have given me advice for my music. I have made music inspired by them and also directly for them, based on their instructions. I have even decorated my studio with Shinto fetishes: zigzag paper streamers, miniature torii gates, and small mirrors.

The act of creating music for me is as mysterious as any religious experience. I enter my studio and after a few hours, music has appeared. I don’t consciously know how it happened, or where it came from. I have heard other musicians talk about this same experience. Of course there’s a rational explanation, I just can’t explain it. But for me, it’s much like a spiritual experience. 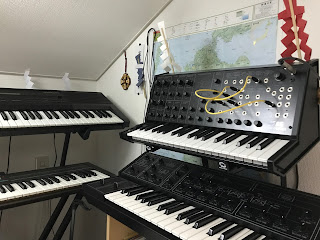 As a lifelong atheist, I find this interest in Shinto a little overwhelming. The rational part of me wants to dismiss this, yet the creative part of me knows that something is happening. Perhaps there is a scientific explanation for it, it’s just beyond our current understanding. All I know is that Shinto has become a potent addition to my music-making process.

Musicians often say that their instruments have a soul. I think anyone who has used vintage synthesizers will agree with this. There’s just something special about working with older synths and drum machines. They’re quirky and special, and learning their unique attributes helps create a bond between the player and instrument. It becomes almost like a partnership, a collaboration.

According to Shinto, there is indeed a spirit, a consciousness in your synthesizer. It isn’t there from the start. It comes from use, from being handled and loved. This is a major reason why I prefer vintage gear. We say the new gear is soulless. This is only because it hasn’t had a chance to develop a soul yet. Perhaps.

I feel particularly bad for old gear that has been mistreated, abused, abandoned. I often compare buying old gear and fixing it up to adopting senior pets. They still have a lot left to give. And it’s precisely because they’re old that they especially need the TLC. (Actually, in Japanese folklore, old items that have been improperly thrown away can turn bad and become yokai, or monsters. Can you imagine a yokai synthesizer?)

Visiting shrines. Meditating. Making music. These things all feel similar to me. They all help me connect with a creative and spiritual power beyond my rational self. Making music is how I worship, and working with vintage gear is a kind of communion between spirits. Quantum physics says the universe is permeated with consciousness. This is never more true to me than when I’m making music.