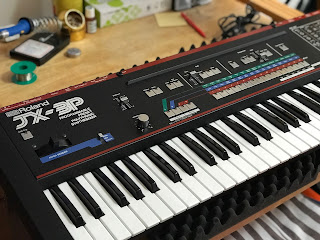 I freely admit that the main reason I wanted a Roland JX-3P was because of the way that it looks. Those red accents. Those silver buttons. Those rainbow-like racing stripes. The DX7 and Poly-800 might be in a two-way tie for the most '80s-looking synthesizer, but the JX-3P is not far behind. However, unlike the two former synths, I absolutely adore the design of the JX-3P.

It also doesn’t hurt that it sounds incredible. It has a shimmer to it, a heat haze glow that is unique among the '80s polys. Aluminum vapor. Summer days and gleaming fiber optics. Holographic alchemy. Magic, in other words. 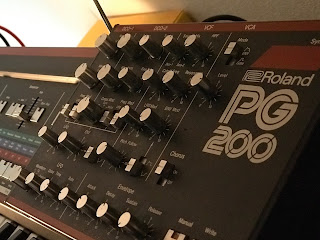 The relative rarity of the machine only adds to its allure. It’s quite possible that I never even saw a JX-3P in person until mine arrived at my door. I remember seeing pictures and thinking how odd it was that it had a separate programmer, the PG-200. Why not save everyone the trouble and just put those controls on the front panel like a Juno-106? It’s not like it saved the consumer any money—the JX-3P was more expensive than the 106. Of course, having to buy two machines was good for Roland’s bottom line, but the history of the development of the JX-3P may help explain it as well.

If I remember correctly, the JX-3P was actually born from the GR-700, a guitar synthesizer. It had reached a certain state of development when Roland realized it could be spun out into a keyboard synth as well, and so the PG-200 can be used with both the 3P and the GR-700. The fact that the 3P came from a different R&D team than the Juno and Jupiter is reflected both in appearance and sound. Certainly it looks like nothing else in the Roland catalog, and when you think of the sound as something that would mix well with guitar—swirly, chimey, toppy—the thinnness of it starts to make sense. 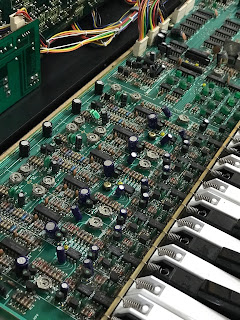 Programmable Preset Polyphonic. Six notes of polyphony for six guitar strings. Presets because guitarists tended to not do much sound design with earlier guitar synths. So you have right from the beginning a unique synthesizer. For me, what sets this apart from the Junos is that it has two oscillators, and so it can do some things that other Roland synths from the same time can’t, like oscillator sync and cross modulation. The latter is admittedly subtle, but detune that second oscillator a bit and here come the fireworks.

My keyboard and programmer arrived in great shape, with very little sign of wear and tear on either of them. It even had the original sheet music stand. No programmer case though. Opening it up, it looked like maybe I was the first person inside since it left the factory in Hamamatsu. Not bad for $400.

Technically, there was very little wrong with it. I squirted a little DeOxit into the switch housing for the pitch bend range, as the low setting wasn’t engaging cleanly. I also doused the hold and sequencer start/stop tact switches with some of that magic elixir. I had planned to change all the tact switches but apparently the JX-3P uses proprietary ones. I bought two just in case and they weren’t cheap so I’ll save them until I really need them. I can’t imagine what a full set would cost—assuming I could even find that many of them. 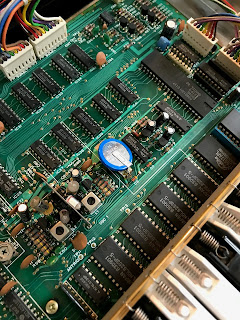 The only real surgery involved was changing the internal battery. The original had a barrel-type battery but I didn’t feel like ordering one so I just used a coin cell I already had on hand. It worked fine. Of course I lost the sounds from banks C and D but I loaded in the patches from this YouTube video and they sound great. They really show off what the JX-3P can do.

The JX-3P is a deep synth that rewards exploration and experimentation. The sequencer is weird and wonderful, and I love using the mute button to lower the volume of the lower notes when using the hold button for drones. It even has hidden parameters. I swear, it’s synth alchemy. Yes, it’s on the thin side but I just accept that as its defining characteristic. It sits on top of my Poly-61 and together they sound like hot-buttered heaven.

As for whether the JX-3P or the Juno-106 is better? There’s no need to compare when you have both. To my ears, they’re apples and oranges. They complement rather than compete. Elementally speaking, the JX is air to the Juno’s earth. Ether to gold. Radiation to magnetic particles. JXno.