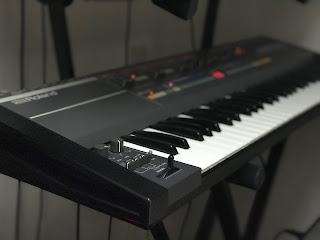 I had no intention of buying another synth, let alone a money-suck like a Juno-106, but there it was on Yahoo Auctions for only $500. I couldn’t resist, especially when the seller had it listed as “no voice chip issues.” Ha! More on that later.

I’ve been wanting a Juno-106 for ages to replace the one I sold in 2001 when I was "downsized" and needed money to pay the rent. It was probably my favorite synth of my old studio, which also included a Sequential Circuits Prophet 600, Korg Mini-Korg 700, and a Realistic Concertmate MG-1. Of course the Juno sounded great, but I also found it to be a reliable workhouse that could handle pretty much whatever I threw at it: bass duties, filter sweep pads, effects. The fact that I associate the 106 with reliability will tell you how long ago that was. This was before the great 80017A VCF/VCA IC die-off.

My new 106 arrived in a light gig bag with just a thin layer of bubble wrap between it and the elements.  I’m talking no box at all. That should have been my first clue that all would not be well. Plugging it in, I immediately noticed the tell-tale sound of an envelope that wasn’t closing properly. I entered test mode, cycled through the voices, and sure enough, voice six was hanging. It was faint, so I’m willing to give the seller the benefit of the doubt that he gave it a quick check and then said, “It works.” But the longer I left it on, the worse it got, until at last it was a crackly mess. This would definitely need dealing with.

I opened it up and there they were: a full set of black death ICs all ready to expire. I weighed my options. The easiest way would be to yank the board out and send it to Synth Spa in the US to have the chips refurbished. Synth Spa has a good reputation, and they told me they honor their work for 8 years. The service also includes calibration, which is something I don’t know how to do.

The next easiest option would be to buy clone chips from Analogue Renaissance in Belgium. A full complement of chips is about the same price as the Synth Spa service, but doesn’t include installation or calibration.

Lastly, I could try to resuscitate the chips myself, but it doesn’t look like fun. It involves soaking the ICs in acetone to remove the black resin coating, resoldering the tiny tiny surface mount chips on the IC, removing the old pin legs, installing new ones, and then putting sockets in the board. I would also need to buy an oscilloscope to do the calibration, which would be an added expense, plus it might not be the brightest idea to tackle something like a 106 on my first try. No, there were just too many opportunities for error, and considering all the other things I have to do to get this unit ship shape, I figure I’m better off leaving it to the pros. So I’m 90% sure I’ll be going with Synth Spa for this.

While I had the 106 open I squirted some DeOxit into the HML output switch, which was noisier than my junior high school students during lunch break. I noticed that the battery was looking a little old, so that will need to be changed out at some point. I also read about power issues resulting from dry solder joints in the power supply, so I’ll be tackling that down the road as well. But that wasn’t all. Oh no, we’re just getting started.

Looking at the main panel, I couldn’t help but notice the blue buttons. Or what must have once been blue buttons. The current shade was more like a high school sophomore’s hair after one too many applications of Manic Panic. The white buttons were on the grody side of yuck as well. I’ve looked into this, and it seems some people use varying amounts of hydrogen peroxide, while others have painted them to restore them to their original hues. More research is required. Of course, where there are buttons, there are tactile switches, and this unit will need all 34 replaced.

The Juno-106 is lauded for its controllability. All those sliders make patch editing a breeze. They’re also prone to all kinds of problems. While some of mine glide just fine, others are stiff and raspy. I tried a little DeOxit down in the trenches but it didn’t do anything, and apparently this is actually a bad idea for Roland sliders. While there are new sliders available from LA Synth Co, it’s about a hundred bucks for a set, but that doesn’t include the highpass filter and bender board sliders. No matter what, I’m going to have to refurbish some, so I may as well save some money and do them all. If I break one or two, I can always order them individually. And then the neoprene slider dust covers will have to be replaced, possibly with felt.

Lastly, aside from the one dead key (likely dirty contacts), there’s a dent in the case just below the cutoff faders. Maybe someone lost their temper after realizing how much time and money fixing this thing up would take. I have no idea if the dent can be smoothed out easily without cracking the paint. I sure hope so. I’m already looking at quite a bit more money flying away than I had initially counted on.

After I decide what to do with the chips, I’ll place the order and probably clean the key contacts. The rest will have to wait until summer vacation, as I have quite a few other ailing synths in line for work before this, and I do also have a full-time job. But I have no doubt that it will all be worth it to once again have a clean and working Juno-106 in my studio.