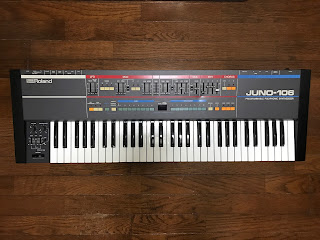 After much deliberation, I decided to send the voice chips to Synth Spa in America to be refurbished. I like that Allen stands behind his work with an 8-year guarantee. His prices are also reasonable. But mostly, with all there is to do on this restoration, I’m going to need a good sounding synth to keep me motivated in the days ahead.

According to their site, Synth Spa only takes in new work via eBay these days. I did a search on eBay for Synth Spa and two entries came up, and both are for the 106 voice chip restoration. One is slightly more expensive. It’s a little hard to tell the difference but the more expensive one seems to be aimed at the gigging musician. Perhaps the ICs are slotted in a more secure way. But really, I’m not sure. 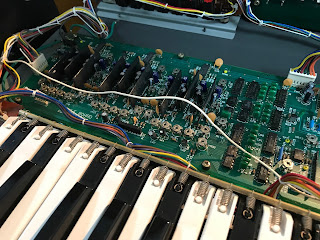 I chose the cheaper version and a few hours later, I received instructions via email to remove the board and send it through the mail. The instructions looked easy enough—just disconnect cables and unscrew the board from the base of the synth—but when I looked at my board I saw there was an extra wire soldered to a point marked TPAG, test point analog ground. It joined a snake of tied cables and seemed to be connected to the top of the jack board. I fired off an email to Allen asking if I should desolder the wire, clip it, or what.

While waiting for the reply I thought I’d see if I couldn’t get that low C note working. I figured it was probably just a dirty contact. Unlike the Poly-61, whose key contact board can be unscrewed without having to remove any keys, the 106 requires you to manually remove each key. First, carefully unhook the spring at the top of the key. I press my left thumb over the spring on the key end to hold it in place and keep it flying away while I unhook the other end with a curved tool. Next, push the key down and away from the rear of the keyboard chassis and it should slot out. At first, I couldn’t get the keys to budge and then I realized there was a strip of plastic underneath preventing the keys from moving. I unpeeled that and threw it away. The keys came out easily after that.

I removed three keys, which were enough to give me access to the rubber plunger contact strip below. I carefully peeled it up, taking care not to tear any of the little nubbins that hold the strip to the board, and looked at the contact. It was pretty clean. I gave it a quick wipe with isopropyl alcohol just to be sure but I wasn’t expecting much change. I tried pressing on the plunger with the handle of my screwdriver but there was no sound. Sometimes, if the contact is dirty, this direct pressure will produce intermittent sounds, but this one was completely dead.

By now, the reply had arrived from Allen: “Congratulations! You have a rare rev 1 board. Desolder the wire from the test point eyelet.” Well, lucky me. I wonder what other unexpected delights await with this rev 1 board. I desoldered the wire, disconnected the other cables (taking care to document everything with pictures just in case I got confused later), unscrewed the module board, wrapped it in paper and then foil per the instructions, and took it down to the post office.

After a stop at my local conveyor belt sushi place for lunch, I was back wondering what to do about the key contact. With the module board gone, I couldn’t make any sound, so any real work would have to wait until it came back. There isn’t a lot on that contact board, just a strip of diodes. Considering there’s only one dead note, I’m guessing it’s probably that diode, but I won’t know until I can take it out and test it. It looks like that diode, part number 1S1588, isn’t made anymore, but a quick search on eBay shows a lot of NOS (new old stock) available. It’s a common part in Roland gear, apparently, so I might just buy a set just in case. Edit: looks like the part is available, it just has a new part number, 1N4148. Good news.

Since I had the 106 open, and I couldn’t do anything else with the voices on their way to a relaxing stay at the spa, I thought I may as well yank out the rest of the keys and give them a good soak in the sink. With the plastic strip gone, they came out easily enough, and were soon wallowing in a mix of warm water and a little dish soap.

I brushed the dust away from the contact board with a wide, soft paint brush and pulled up the rest of the first contact strip. All the contacts were extremely clean. I have to say, this might be the cleanest synth interior I’ve seen yet. Considering how faded the front panel buttons are, I thought this poor guy had spent a lot of time outside, but it seems he was definitely an indoor synth. The first set was so clean, I didn’t even bother pulling up the rest of the strips, and put the first one back, careful to align all the nubbins and their corresponding holes.

By this time, the keys had soaked long enough, so I removed them from the sink one by one, rinsing each and giving it a little scrub with a soft sponge. They were wiped with a towel and laid on paper towels to dry. Once dry, I organized them all by type. Their note position is marked on the bottom (the black keys are all the same). Lastly, I put them back, starting with high C, which is unique, and then doing one octave at a time. Be aware that you have to put the black keys in first, as they’re blocked by the white keys.

Lastly, I thought I’d mention these service stickers I discovered inside my Juno. The one on the left clearly shows service in 1995. I’m guessing this was the battery. But how about the one on the right? What year is 59? In Japan, years can be counted two ways: the Western way, and according to the reign of the emperor. This would be the 59th year of the Showa Emperor, or 1984. It looks like IC7 was changed out, and the VCF was tuned or adjusted. Something to keep in mind going forward.

After the voice module comes back, I’d like to settle that dead note issue as well as reflow the solder for the transistors along the heatsink on the power board. I’d hate to get it all working and then fry the poor thing. After that? I think the rest will have to wait until summer break.