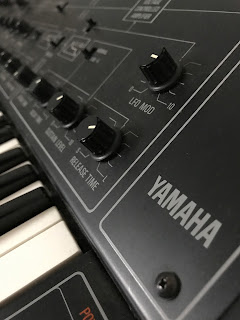 A while back I decided I needed a new mono synth. I love my Korg MS-20 Mini but it can be a tad, shall we say, aggressive. I forgot to feed it on time once and I woke up with a patch cable up my nose. The Yamaha CS01 is fun but it’s not my go-to synth. Actually it’s more of a forget-to-go-to synth, but I’ve talked about that before. And then of course there’s my darling Technics SY-1010, but unless I need something vaguely sad, I probably won’t reach for him either. No, what I needed was an all-around mono synth, something that could handle bass, leads and effects, would sound good doing it, and wouldn’t eat up too much of my poor English teacher’s salary.

I thought I’d take advantage of the city I live in and visit Korg’s showroom on the outskirts of Tokyo to do my browsing. Alongside their own gear, Korg also had instruments set up from the companies they distribute in Japan, namely Arturia and Moog, so I set about annoying the polite guy manning the phones in the corner for the next hour. 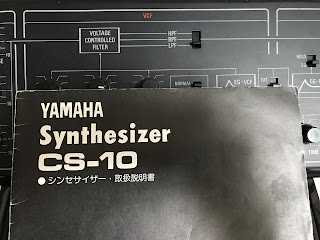 I tried Arturia’s wares first, twiddling knobs and bashing keys on the Brute line, from Micro to Maxi. While I liked all the modulation options, the sound just didn’t impress me. Too brown. Likewise I was disappointed with Korg’s Monologue. If I were still doing breaks it would be perfect, but its modern sound doesn’t really mesh with my current, vintage-vibey music. Of the synths I played with that day, the ones I most wanted were the Karp Odyssey and Minimoog Model D. Actually it was my first time to play a Minimoog and my god, the stories are true. All of them. That thing is flabbergastingly gorgeous.

Poor teacher that I am, I left empty-handed but what I realized was that I wanted a vintage synth.

While perusing Mercari, which is surprisingly popular in Japan, I found a very clean-looking Yamaha CS-10 for around $200. Maybe a bit more than I was hoping to spend, but it looked so good, I just couldn’t resist. The next thing I knew, I was scooching gear around my already cramped loft studio, trying to make room for another set of keys. 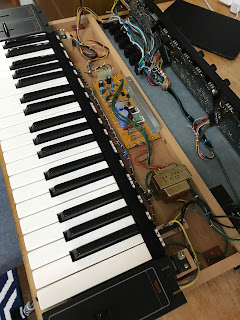 The CS-10 is a three-octave mono synth, and part of Yamaha’s illustrious CS series, which stretches from the vaunted and gargantuan CS-80 down to the diminutive CS01, which lost more than just the hyphen from its name on the way down. The CS-10 was released in 1977 alongside the CS-30 and CS-30L, and would be followed the next year by the CS’s 5 and 15. The 10 is a relatively simple mono synth but it has it where it counts: it sounds great.

Let’s start with the oscillator. The CS-10 has only one but unusually for the time, it can blend sawtooth and square waves, as well as noise. This results in a beefy, burly sound with plenty of oomph. In addition, the square’s pulse can be modulated manually or via the LFO. This, when combined with the sawtooth, might even make you forget there’s only one oscillator. Tuning can be set from a bird chirp-high of 2’ all the way down to a Hades-rumbling 64’. Not bad for a 3-octave budget synth.

Next up comes the famous CS filter, which is justifiably lauded across the land. A 12db multimode job, it includes low and high-pass filters as you’d expect, as well as a delicious band-pass filter that just begs to be tweaked. And speaking of tweaking, the resonance is lovely and squelchy and above all musical. It won’t self-resonate but it won’t let you down either. Push up the resonance and you’ll notice that the bass doesn’t disappear, unlike on many synths. And yes, there’s an external input so pretty much any sound you like can benefit from the CS filter touch.

Next let’s look at the envelopes. The CS-10 has two of them, one for the VCA and one for the filter, and both have two time settings, regular and x5. The former is snappy enough for drums, while the latter is almost absurdly long and ambient. The VCA has a standard ADSR but the VCF envelope has some unusual settings that can really help to sculpt your sound. I’m talking about the IL and AL, the initial level and attack level. To tell the truth, I always have trouble with any envelope that has functionality outside of the usual ADSR pattern, and this one is no different. IL sets how low the envelope starts, in terms of the cut-off frequency. The AL determines how high the filter will open during the attack phase of the envelope. Note that these two knobs take the place of filter envelope (or MG) amount, which you might be familiar with from Roland or Korg synths. The filter envelope does not have release functionality, however.

The CS-10 is also adept when it comes to low frequency oscillations. Although it only has one, it’s a good one, capable of saw or sine waves that can go from relaxed and lazy on up into the audio rate. It can be set to modulate the pulse width, oscillator pitch, filter and even VCA for tremolo effects. My only complaint is that the CS-10 doesn’t have a sample and hold circuit like the 5 or 15.

Lastly, as I mentioned before, external signals can be pushed through the circuit. The filter is the best choice for this but also, like the MS-20, external signals can be used as a trigger for the synth itself. There are also two keyboard trigger settings (for legato, or what the manual untechnically describes as “slur touch”), hold, a nice portamento, and pitchbend, which is a springless lever with a center-indent. 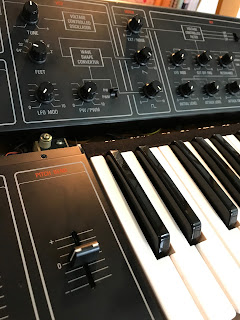 Although my unit was super clean (God bless the Japanese for taking good care of their stuff), it still had some of the usual senior synth issues, like noisy pots. I took it apart, squirted some DeOxit in each one, and it was sounding great in no time. I ran into some trouble with the pitch bend slider though, in that it wouldn’t bend down, only up. I tried DeOxit and that didn’t do it, so I took it all apart looking for loose wires or other obvious signs of trouble. I couldn’t find anything so before going further I though I’d try DeOxit one more time and what do you know, it came back to life. It's not perfect—it sounds a little seasick when you linger at the bottom of the bend—but for a synth that’s almost as old as me, it’s doing well enough.

The CS-10 is of course pre-MIDI but it does have CV/gate ports, both in and out, and given that it’s basically Hz/V like my MS-20, I figured it would work with the Korg SQ-1. And work it does! That squelchy filter and the SQ-1’s note ties were made for each other. Very acid. However, because of 40-year-old proprietary technology (or something), the CS-10 won’t play notes all the way down. It’ll go much higher than intended, which is fine if you want to terrorize the neighborhood canines, but not very useful musically. This is the same when using the SQ-1 as a MIDI-to-CV converter. I even tried using an attenuator cable but all that did was make everything sound out of tune.

And then it hit me! What if I controlled the CS-10 from the MS-20 Mini, but the latter via USB MIDI? I hooked it all up, played some low notes, and ladies and gentlemen, we’re floating in bass. I could finally control the CS-10 via MIDI and not lose any low notes. And it sounded amazing playing in tandem with the MS-20. I wonder how it would sound playing with another CS unit, like a CS-5?

Stay tuned to find out.