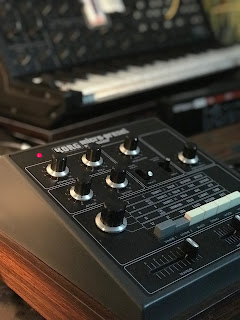 British synth pop brought the synthesizer into the mainstream. Before that, it was largely confined to specialist performers like Vangelis and Jean Michel-Jarre, or the occasional soundtrack. But a new generation of young musicians harnessed the power of the then-still new instrument to create bold and fresh new sounds. A big contributor to this was the availability of relatively low-priced preset synths. With reduced functionality but also a reduced price tag, these synths—often available on layaway—proved a boon to young musicians hoping to forge a new genre without the prohibitive price tag.

One such group was Liverpool’s Orchestral Manoeuvres In The Dark (hereafter referred to by the much less unwieldy OMD), who married catchy pop melodies to experimental ideas. Their early records featured the Korg M-500 Micro Preset heavily. It can be heard providing leads on songs like “Enola Gay” and “Messages.” Play with an M-500 for a few minutes and you can’t help recalling those songs.

I didn’t get into OMD until I was older. My knowledge of the band at the time started with “Tesla Girls” and ended with the prom scene in Pretty In Pink, and by then they had already retired their little M-500. I didn’t really get into them until my early 30s when I started DJing an 80s night at a bar in Los Angeles. So when a clean-looking M-500 became available on Yahoo Auctions, I snapped it up. 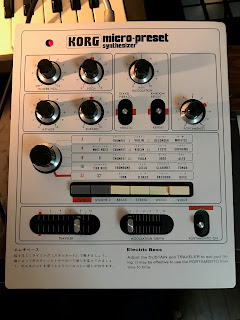 First released in 1977, the M-500, like some other preset synths of its time, is basically a keyboard with a small box of dials to its left. As you’d expect from the name, you’re limited to preset sounds, accessed via a knob to select oscillator feet, and buttons to choose your sound type. It has the usual brass and wood sounds, plus a few other attempts at known acoustic instruments, as well as two synth sounds. There’s a simple envelope and filter in the form of a “traveller,” which is like cutoff and resonance in one slider. There are a few other basic functions like vibrato and repeat for things like mandolin sounds.

The circuit is exceedingly simple but don’t let that fool you into thinking the M-500 isn’t worth your time. It most definitely is. You can select two presets at the same time for more exotic sounds, and the filter... excuse me, “traveller,” is gorgeous. If you’ve heard any first-wave Korg synths, you’ll know what I’m talking about. I had a Mini Korg-700 in my 20s and I was instantly transported back to those days of youth and innocence. Actually, “innocent” is a good way to describe the sound of the M-500 as well. Cheerful and smooth, the M-500 would probably get its lunch money stolen by the MS-20.


My machine was exceedingly clean, with only a little noise in a few pots, and the occasional warbly key. A little DeOxit took care of that, and I was soon enjoying the included overlay cards to help in making locomotive and trombone sounds. It even came with a brown, faux-leather gig bag. I can dig it.

What I couldn’t dig, though, was all the rust inside.

Japan is a humid country, especially in the summer. Keeping the moisture and mold at bay requires constant vigilance. You can’t just shove an electronic instrument into your closet for 20 years and expect it to remain unmolested. Considering this unit was almost as old as I am, it really wasn’t so bad, but rust there was, and it needed to be contained. 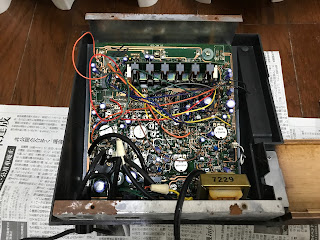 Looking around inside, the rust was basically confined to the feet of the keyboard chassis and circuit board support. Thankfully none had reached the PCB, or I’d be writing a very different story (likely involving wailing and gnashing of teeth) right now. No, this rust had come in on the screws that hold the internals to the base, which is made of wood. The whole synth is basically a wooden box with keys and a plastic top. Although chintzy, this essentially saved it from rusting any further.

As the rust likely climbed in on the screws, I wanted to take care of them first. I replaced all the screws in the base with new, silver ones. Although the old ones were black, which matched the paint on the wood, I figured no one would be flipping over my synth and inspecting the bottom any time soon. The four screws that hold down the panel above the keys were a different story. I wanted to preserve the aesthetic and so I decided to treat these screws with an anti-rust lubricant spray. A few spritzes and a wipe down with a paper towel and they looked great. The spray is also supposed to protect against the rust coming back. 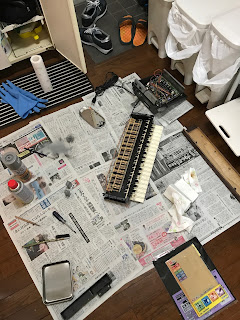 I used the same spray to neutralize the considerable amount of rust on the unprotected metal feet that screwed directly into the wooden base. I couldn’t remove the rust—there was too much—but the spray did turn it a dark brown, so I hope that did it. I also wiped some onto the areas on the bottom of the keyboard chassis that looked a little rusty. As this had been painted, it wasn’t nearly as bad as the bare metal brackets, but areas like inside holes and where paint was coming off really needed it.

Next I used a rust-proof spray primer to coat the affected areas. To keep everything safe, I first sprayed the primer onto a small brush and then carefully painted it on. It looked great on the bare metal brackets, blending in smoothly, but unfortunately stood out against the black paint of the keyboard chassis. I suppose if anyone opens up my M-500 I’ll have some shame-faced explaining to do.

Having completed this job, I can see now what the weak link is in these old synths, in terms of rust prevention. It’s the screws. I recently got an old Yamaha CS-5 in need of some attention, and I can already see that the screws are going to need to take an oil bath. The jacks on the rear seem in need of derustification as well. We’ll see how that goes. No matter what, you can be sure you’ll be able to read about it here.