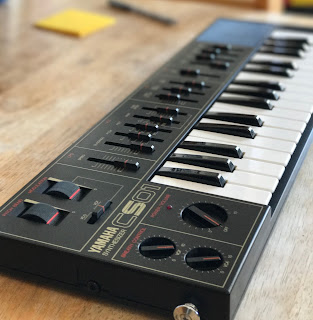 Sometimes a synth surpasses all expectations and blows you away. Sometimes a synth that you didn’t expect much from fulfills a need in surprising ways. And sometimes, no matter how hard you both try, a synth just won’t live up to your expectations, even if they’re modest ones.

The Yamaha CS01 falls into the latter category for me, mainly because of its lack of MIDI. But more on that later.

The CS01 is part of Yamaha’s illustrious CS series, which stretches from the humble CS01 all the way up to the godlike CS-80. I have never even seen a CS-80 in person, let alone played one, so I can’t comment on it, but I do have a CS-10 and like it very much indeed. It’s hard to see the family resemblance in the diminutive CS01, with its Casio-like slim plastic housing and mini keys, although the filter does sound similar to the CS-10’s.

Released in 1982, the CS01 is a single oscillator mono synth with the usual filter, LFO, and ADSR configuration. Where it distinguishes itself from other mono synths of the era is in its VCO, which is digital and gritty, and sounds not unlike a Casio, although one with some serious oomph in the bass department. The waveforms cover triangle, sawtooth, square, pulse, and pulse width modulation, the latter of which is really something to hear. Pair that with a sweep from the creamy 12db filter and you’re in bass heaven. The filter doesn’t self-oscillate, although the trim pot for the resonance isn’t hard to find if you want to give it a little boost, which is almost required given there are only two settings for resonance—timid and insipid.

Other features include noise (although this can’t be mixed with the waveforms—it’s either/or), glissando, which is not portamento at all but a kind of cascade of notes running between the new note and last note played, and a breath controller input, which actually really does sound cool when used well. The breath controllers are pretty rare though. 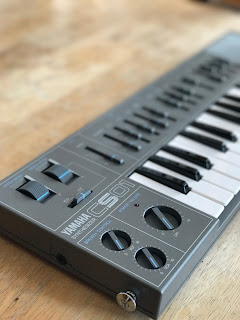 It’s a damn shame the CS01 doesn’t have MIDI, as this is the kind of bass line synth that just cries out to be tweaked. There was a second edition released in 1984 with MIDI and a full range for the resonance, but I haven’t seen one for sale before, not even once. (It appears I was wrong and the MKII doesn't have MIDI. Live and learn.)

My current CS01 is my second. It’s black, which may or may not be rare, but seems to be less common than the gray ones. I bought it on Mercari, a kind of eBay site, here in Japan. Although Mercari seems to be mostly for clothes you do occasionally find synths on there as well (I also found my CS-10 there). It was around $100 and had only one previous owner and, considering its age, cosmetically gorgeous. So imagine my disappointment when I plugged it in and heard nothing.

Well, almost nothing. Sound came out of the built-in speaker but the output and headphone jacks were quieter than a Japanese movie theater during a comedy. (In case you’ve never been to Japan, that means dead silent.) I opened it up to see if I could find the problem and there it was: a crack in the PCB, right next to the headphone jack, which was pushed in slightly and askew. Perhaps it had been dropped with headphones in at one point. 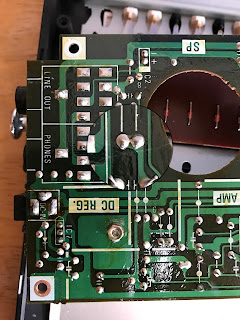 The crack was small but was definitely interrupting a trace, so I carefully scraped a little of the trace off of either side of the crack and then bridged the crack with solder. After putting it all back together, I had full sound from the output, but only one ear from the headphone jack. Good enough. I suppose I really should replace that headphone jack though. It would be easy enough to do.

Now that I could hear it properly, I ran it through its paces and realized that the noise function wasn’t properly engaging. Noise is at the bottom of the oscillator range slider, and although I could hear all of the different “feet” with no problem, from 4’ down to a rib cage rattling 32’, when it hit noise it broke up like Steve Austin’s ship in the opening credits to The Bionic Man. A few spurts of DeOxit and it was as good as new.

Reading back through this, I can see how someone could get the impression that I like the CS01, despite its faults. And I do. It’s cute, it has a nice (if limited) sound, and it does a few things that my other synths don’t. It’s just so limited without MIDI. I want to program a bass line or hook up my Korg SQ-1 and let it run while I tweak the filter cut-off and filter envelope depth. Man, it would be so cool.

“You’re capable of soldering, right?” I hear you asking. So why don’t I install a MIDI kit? While it’s true that Highly Liquid’s old kit is long sold out, the company does now sell a generic board that will apparently do it. It’s just that, well, I’m afraid I’ll kill it. I tried to install a DIN sync kit in a Boss DR-110 and even though it looked simple and I was sure I had done it correctly, the poor thing died a spasmodic and needless death. I’m not ready to attempt another MIDI mod just yet.

I did just see a CS01 on Yahoo Auctions with a professionally installed Highly Liquid midi mod go for around $250, which is not bad at all. I suppose if I found another for that price I just might have to go for it. In the meantime, my CS01 is getting about as much love in the studio as my Casio SK-100. That is, not much at all.