The Mysterious Case Of The Pink Japanese Casio SK-1 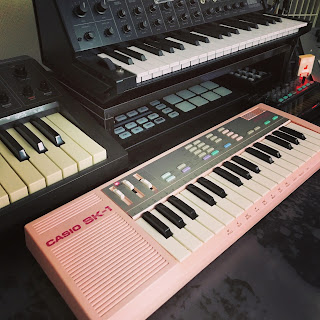 It’s often said that the Casio SK-1 was the first mass-market affordable sampler. Not long after the introduction of such behemoths as the Fairlight and Synclavier, whose price tags were more in line with high-end cars than musical instruments, Casio managed to get sampling into the hands of the unwashed masses. Including the unwashed hands of a certain junior high school boy, who saw it as a way to finally realize his dream of making a perfect copy of Dead Or Alive’s “You Spin Me Round (Like A Record).”

I had the synthesizer, a Korg Poly-800 recently received for Christmas. I had the studio, in the form of a keyboard amp, Numark mixer, and belt-drive turntable. All I needed was the drums. It was this, more than the sampling function, that really had me excited about the SK-1. I could just hear it: the rapid-fire hand claps, the machine gun cowbell. All of that Hi-NRG rhythm would soon be mine.

Of course, anyone who’s heard the SK-1 (or any other Casio home keyboard for that matter) can imagine my disappointment when I finally got one of my own. I’m not sure what I was expecting. I didn’t know anything about drum machines or programming rhythms, or even how that happened. All I knew was that the drums I was expecting, and the drums I had, were about as close as I was to Stock Aitken Waterman in terms of making hit songs. No, the closest I ever got to pop song perfection was coughing into the built-in mic and hitting the demo button.

My music-making skills have improved since those middle school days (at least I’d like to think they have) but there’s something to be said for going back to basics and using what might be considered to be outmoded technology. While looking through Yahoo Auctions one day on my train commute home, I found something interesting. Here was not only an SK-1 (or “skwun,” as my friend liked to call it) but it was pink. Remembering that they were something of a rarity, I immediately hit the buy it now button. Eighty bucks was a little more than I wanted to pay for a skwun (most were around $20) but I just couldn’t resist the novelty of the pink color scheme.

When I got the box open, I soon realized that this unit was a little different than the one in the Pinterest pictures. It was pink, alright, but slightly more garish, and the color scheme of the buttons was very different. Also mine didn’t have those fetching buttermint-blue sharp keys. Just black licorice black. But what really had me interested was the silk screen printing on the case. All of the functions were printed in Japanese, from sound names to parameters. How very odd. 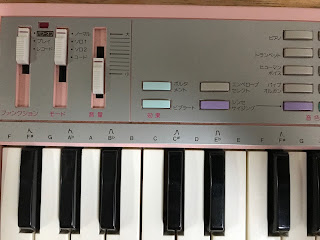 Pretty much every mass-marketed electronics device in Japan has English lettering. From stereos to car dashboards, they’re manufactured to be sold around the world, and English is the defacto lingua franca. But not this pink SK-1. It was covered in Japanese. The functions were all exactly the same, they were just labeled in Japanese. Very curious.

I posted pictures of it on a Facebook synth group to see if anyone had ever seen one before. No one had. Google image search only turned up the same recent auction listing. Perhaps it was a promotional item, like the Nissin Cup Noodle SK-1 with shoulder strap and hand grip. Or perhaps it was an in-store demo item, with the parameters labeled in Japanese to make it easier to sell. I had quite the mystery on my hands.

Turning my attention away from its appearance, I got down to the sound. The volume slider was a little crackly but a few squirts of DeOxit took care of that. I went through all the digital PCM and additive sounds and they were just as I remembered: the sharp piano, brash pipe organ, useless echo tom, and that voice saying “hello,” perhaps. What the hell was I supposed to do with that? Hit demo, of course.

And then I noticed the envelope shapes above the keys and the numbers below them. What was this? I downloaded a PDF of the manual and it turns out that not only can the SK-1 handle 1.4 glorious seconds of 8-bit, 9.38 kHz samples (that vanish when you turn it off) but it has a programmable additive synthesis function. What the what? I don’t think I ever even noticed the numbers or envelope shapes when I was 13, or if I did I had already lost the manual and couldn’t get it to work. But, being a responsible adult, I now had the manual in my iPad and set about programming additive sounds. Such fun. More so even than the sampling, which always seems to include the pop of the sample activation button.

I was still no closer to solving the mystery of the color though. I tried writing a letter to Casio USA but as I expected they couldn’t be of much help. And how could they? The thing came out in 1985 and I was asking about a Japanese model. I had no choice but to try and write a letter to the Japanese headquarters. In Japanese. Polite Japanese. In case you don’t know, Japanese has the most complicated system of honorifics of any language in the world. It’s like an entirely separate language. But I really wanted to know the story behind this thing so I put on my politest big boy shoes and sent off a clumsy but hopefully sincere letter asking for help in identifying this oddity.

The delightfully polite response made me very happy, and is a good example of why I like living here. I’ll translate it here, as I think it’s pretty darn cool.

Thank you for honoring us with your continued patronage.

Thank you for purchasing an SK-1. I’d be happy to help you with your inquiry.

The SK-1 with the pink exterior, black and white keys, and Japanese panel lettering was sold at the same time as the black SK-1. There is a catalog from the time, which I have attached.

Thank you for your continued support. 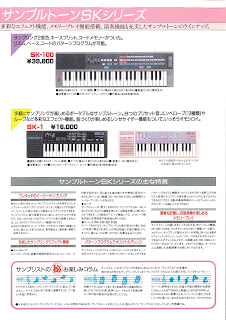 Mystery solved. It’s a Japanese domestic unit, and the Japanese complement to the American limited edition pink machine. How about that? Also wasn’t that so nice of them? They thanked me for buying a used Casio keyboard that came out in 1985. And they even sent me a PDF of that year’s catalog. So cool.

Meanwhile, while all this was going on, I had shown my rarity to my girlfriend. Although she does occasionally say things like, “Shouldn’t we be saving for our future?” usually she’s really awesome about my lifestyle choices because she knows they make me happy. But when I showed her this one, she flipped out. “It’s pink!” she exclaimed, and started calling it Pinky and referring to it as a her. “It’s so cute!” Crisis averted.

After finding out how rare it was, I thought I might try and sell it on Reverb. The US pink versions were selling for hundreds of dollars so I thought if I found the right buyer I might get a similar price for this. And I figured she’d be happy since for once there would be money coming back into the studio.

“But I can get a lot of money for it, probably.”

My girlfriend, ladies and gentlemen. What a sweetheart.

Pinky has since left my studio, but you’ll be happy to learn she’s being well taken care of by my girlfriend, and isn’t lonely in the least bit.