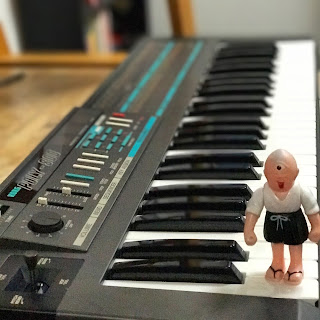 Ah, my first synth. So 80s, so plastic, so disposable.

The Korg Poly-800 is certainly a polarizing synth. Some people love it; others loathe it. Polyester-800, they call it. I have a hard time being objective because it was my first synth love but I think it sounds just fine. Is it better than a CS-80? No, of course not. Few are. Does it find its way into my songs alongside my other synths? Yes, it certainly does. Would I sell it if I had to? Have done and will do again.

Say what you will about Korg’s 1983 affordable poly but it has a unique sound. This is apparently due to it using a video game sound chip for its oscillators. Use it in single DCO mode and you get a surprisingly generous 8 voices. With two DCOs you have to make due with 4 voices, but for around $800 in 1983 this was ground-breaking. However, whether you actually like the sound of those 8 voices is another matter. The Poly-800 does square waves and sawtooth waves that sound like square waves. So basically if you like chiptune sounds you’ll adore the Poly-800. Makes sense. It’s basically an arcade sound chip with a keyboard.

OK, so there’s more to it than that. It has envelopes that are a tad more advanced than the usual ADSR (something that I’ve still never gotten my head around, to tell the truth), and a filter that wouldn’t be out of place in a Herman Hesse book (because it has steps, get it? Steppes? Never mind.) Throw in a chorus, chord memory, and a quick and dirty step sequencer and you have everything the budget-minded musician could need in 1983. Hell, it even has MIDI. (Just no sysex, but we’ll get to that later.)

It was certainly everything my 12-year-old self wanted in 1984. It was there under the tree at Christmas and took me from piano lessons and endless practicing to programming patches and playing in a local garage band (we literally played in a garage). I had a Numark mixer and used the Poly-800 to make my own remixes of songs, recording myself playing over the originals. To this day, when I listen to “Beatbox” by The Art Of Noise, I still expect to hear those wonky pitch bends and helicopter whooshes.

I didn’t know much about synths and wanted to learn more, so somehow my mom got me a few lessons in synthesis with the son of the keyboard player for Santana. I remember going to their nice house in the hills and talking with the son, who seemed old and cool but was probably in university although still probably cool. 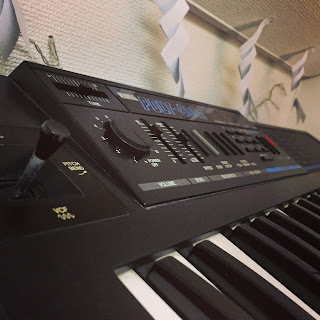 After a few years I picked up an Alesis MMT-8 sequencer and HR-16 drum machine, and could make actual songs. I took them on vacation with us to the mountains and stayed inside programming while everyone else went hiking and swimming in the pool. I see now that some habits form early. By the end of high school my attentions had been stolen by a used Roland S-50 sampler, which was multitimbral and could do just about anything, and by the time the Poly-800’s internal battery died and my presets disappeared I had lost interest. I sold it cheap and didn’t look back.

Fast forward to 2016 and I was knee-deep in cheap synths from Yahoo Auctions in Japan. I found myself longing for that fantastic plastic sound, for its oh-so 80s color scheme of gray, teal and beige, and for its cumbersome programming architecture. Funny how nostalgia works.

After scouring the listings for a few weeks, I ended up with not the Poly-800 that I remembered but the mkII, Korg’s moderately updated version from 1985. Gone was the DX7-style detailing, replaced with a more conservative black and blue look. MIDI had been updated to include sysex, and the chorus replaced with a grainy digital delay. While presets are not compatible between the two units, they sound essentially the same, except for this delay. It’s able to do basic delays and choruses, as one would expect, but it excels at weird pitch shifting effects, which take the mkII into entirely new territory. I wouldn’t describe it as musical or even all that useful but it certainly is weird. 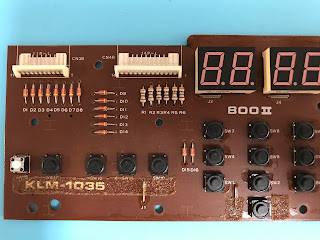 After finding a mkI for a good price, I replaced the battery and tact switches in the mkII, sold it, and almost immediately regretted it. I figured since I finally had my first synth back, and they sounded almost identical, I wouldn’t need it, and yet that digital delay keeps calling out to me, like a pitch-shifting siren across the open synth sea. Or something.

Anyway, I’m on the cusp of selling my mkI (actually two of them, these things happen) so I’ll be in the market for another mkII soon enough. Who knows, maybe I’ll end up with a mkI with reverse keys as well someday. Either way, I’ll probably sell them not long after anyway.