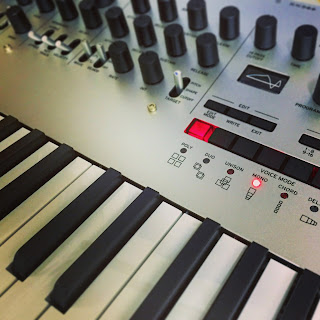 I bought the Korg Minilogue as a present to myself. I quit drinking in 2015. It’s not like I was falling down drunk everyday, but I had reached a point where even a few beers were giving me hangovers and interfering with things like meditation and general life satisfaction. To give myself something to aim for, I promised myself a six-month present and a one-year present. After six months I was the proud owner of a Volca FM (which I later sold) and for being booze-free for a year I rewarded myself with the Minilogue. OK, so actually I bought it at around the nine month mark when I knew I was in the clear. But it continued to function as an incentive since I knew that if I succumbed and had a beer I’d have to sell it and take a loss, and I didn’t want that.

It’s been almost two years now. I still have the Minilogue but oddly enough I’m only just now finding a niche for it in my studio.

People complain that the Minilogue is tinny and metallic sounding. They hate the clicky envelopes. They bemoan the lack of complex modulation. To this I say: it costs $500. It’s never going to be your perfect all-around synth, like maybe the Prophet-6 would be. I don’t see the point in complaining that it’s something that it was never meant to be. You don’t go see a historical drama and then complain that there aren’t enough lightsabers. You don’t go out for Thai and grumble that your pad see ew doesn’t taste like a hamburger. So why expect the Minilogue to sound like a different synth? 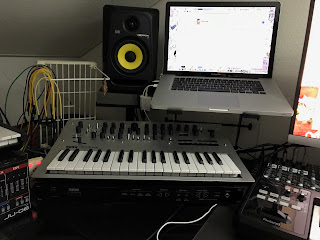 For me, the issue of working it into my music wasn’t that I didn’t like it, it was that I hadn’t settled on how best to use it. Whenever I played with it on its own, I enjoyed it immensely. I liked programming it, and found it it could do quite a variety of sounds, and well. I loved the delay, from which I could get eerie sci-fi sounds and some nice motion. And I liked the sound-shaping options in the oscillator section. But when working on a new song, I would always ignore the Minilogue in favor of some other machine. For bass and leads I went straight to the MS-20 Mini. For strings and pads I fired up the Roland HS-80 or Korg DW-8000. For effects or that melancholy touch I woke up the Technics SY-1010. And so on. But never the Minilogue. I even moved it right next to the computer and my mother keyboard so it was in easy tweaking range, hoping that would inspire me to work it into a tune. But the poor thing remained largely unused.

Recently I was working on a cover of the theme to Escape From New York. I was building it up layer by layer but had left the main lead for last. I tried different sounds but was having trouble fitting it into the mix, which had become pretty full by this point. I had HS-80 strings and drones, DW-8000 pads, bass from both the Yamaha TX81z and Roland JU-06. I even had an acid line courtesy the CS-01 (with Korg SQ-1 handling midi to CV duties).


And then I reached for the Minilogue. I crafted a lead sound that was full yet not overpowering and made use of the waveform shaping capabilities to give it some bite to differentiate it from the rest of the mix. I tell you, that sound just soared over everything else. Happy, I continued to stack up more sounds and all the while, that Minilogue lead held its own.

It continued to stand out in the mixing stage. Mixing down a song made almost entirely with one kind of sound is really hard. I love the sound of analog, don’t get me wrong. My synth tastes lean towards ‘70s mono synths and ‘80s poly synths. They just tickle my soul. But get 10 or so lanes of soft analog all chugging along and it can turn into a kind of warm mush. It’s why I don’t mind the occasional FM sound in there. It jumps out. 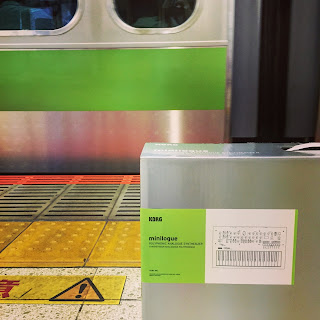 Can you imagine an artist only painting with shades of brown? Unless you’re Rothko, it’s hard to get a lot of definition and differentiation out of a limited palate of colors, fond though you may be of it. A while back I was in the market for a new mono synth. I tried all kinds but was particularly interested in the Arturia Brute series, primarily because of the size and price. I spent some time with one at a music store, putting it through its paces and seeing what it could do. I liked everything about it except the sound. It was too, well, brown. It reminded me of mains hum. And I just couldn’t envision that sound working within my already murky palette.

But not the Minilogue. It’s precisely because it’s a little metallic that it’s able to slice through the analog butter and make itself heard. In the mixing stage, I barely even had to touch it to make it stand out. In fact, I kept having to turn it down because it was almost a little too overzealous in its role as lead.

This is how the Minilogue will enter my workflow. It is the knife that cuts the butter. It is the rainbow on the oil slick. It is the northern lights in a dark sky. It is not an all-purpose synth. It’s the finisher, the Victor the Cleaner of polys. And I’m glad it sits pride of place next to my computer because from now on, whenever I need a confident sound, I’m going to call on the Minilogue. And may I never touch a drop of booze again.