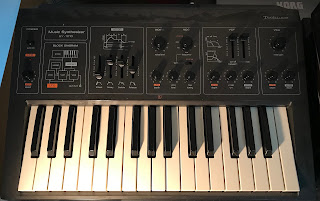 The Technics SY-1010 is not the most famous analog mono synth on the Japanese block. It's not the fattest sounding, nor the most complex. In fact, it's a little on the thin side and downright simple. It has one oscillator with only one waveform, for crying out loud. It's housed in a lightweight plastic case that's prone to discoloration, and its keys are often so yellow a life-long smoker would be shocked. And yet I love it.

It was my first vintage synth purchase in maybe 20 years. I had recently gotten back into hardware, thanks to the MS-20 re-release, and was being increasingly lured in by the tantalizingly low prices on Yahoo Auctions. I had yet to really learn the language of auction lots in Japan but I took a chance and was surprised when I won the bidding for this Technics synth for around $100.

Something of a rarity even in Japan, the SY-1010 was sold in Technics showrooms in Japan in the late ‘70s. I imagine it must have been similar to the RadioShack Moog, the Realistic ConcertMate MG-1. Sell a cut-down synth to home audio enthusiasts at cut-rate prices. I used to have an MG-1 back in the 1990s. It was quirky and unusual, and I'm sure those fond memories influenced my purchase.

I wasn't expecting this SY-1010 to be perfect. I thought it could be a kind of project synth, a way to get my hands dirty and learn more about synth repair. I had recently learned to solder, and had assembled a SparkFun SparkPunk synth kit, and changed the battery in a Yamaha DX7. I was ready. 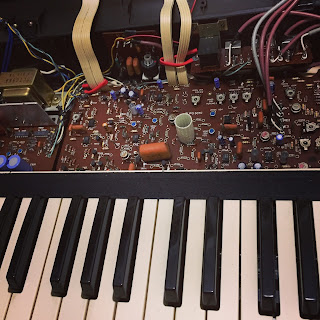 It turned out that this unit didn't need any repairs, but what it did need was tender loving care. Crackly pots, yellowed keys that were either double-triggering or dead, and a grimy coating of decades of tobacco smoke on the front panel. After a good wiping down outside (and removing the clear plastic Japanese language overlay), cleaning the key contacts and scrubbing out the goopy grease covering the key mechanism, and generally just showing it some much-deserved attention, it was ready to sing again.

And sing it does. As I mentioned before, the SY-1010 is simple but it has an almost melancholy character that is difficult to dismiss. There's a single sawtooth oscillator with course and fine tuning knobs, and noise. This is piped through a low pass filter, which can go from smooth to gurgly (but gives up before hitting self oscillation). There's a single, decent ADSR which can be applied to the oscillator and filter, and a sine wave LFO that can vary the oscillator, filter and VCA for tremolo effects. There's also an A440 tuning switch, which is helpful because mine can take a while to get into tune. Lastly, I should mention the VCA’s initial gain knob, which acts like a gate for the envelope, but because it's a rotary you can combine different amounts of ADSR and gate. It's great for expressive drones.

All of this translates into a synth that is great for, well, I'm not really sure. I don't think you can describe it as great at all. Actually to me it sounds a little… sad. Not sad as in terrible but emotionally sad. Perhaps it's because it's always a little out of tune, or because the keys don't always react exactly like they're supposed to, but when I need a certain lugubrious tone in a song I always reach for the SY-1010. 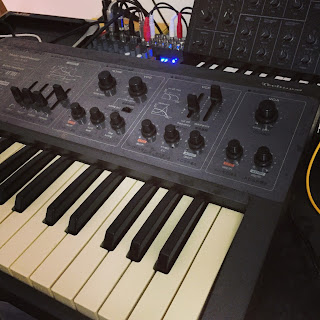 Call me sentimental, but I feel like old synths have souls. In Japan, where I live, there's the idea that inanimate objects develop souls the longer they are handled by people. For an old synth like this, born in the disco era, to have spent its life in a smoky and what I can only imagine as an abusive environment, well, it's no wonder it has a sad sound now. I'm happy to give it a new home and a new chance to fulfill its purpose of making music.

This is something I love about buying old gear. It's how some people must feel when they adopt a senior dog. It might need a lot of extra care, and it might not be around for very much longer, but while it's here it has a lot of love left to give.

Finally, here are two videos I made showing the drone potential of the SY-1010.