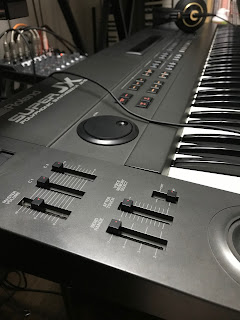 And so it happened that I found myself with a Roland JX-10, or Super JX as they’re also known. Roland wasn’t kidding around with this thing. It’s basically two JX-8P’s lashed together inside a case so big it puts some aircraft carriers to shame. It has a 76-note velocity-sensitive keyboard with aftertouch, a pitch bender with LFO modulation control, and more buttons than a closet full of dress shirts. Like many mid-80s synths, the Super JX foregoes sliders and pots and forces the user to make do with the aforementioned buttons, as well as an alpha dial, which is oddly slow to react for some parameters.

But you don’t buy a synth for its buttons, you buy it for the sound, and in this case the Super JX is really something special. Like I said, it’s two JX-8P’s in one machine, which means you can double up the sounds and create full, rich, layered sounds with up to 12 voices of polyphony. You can also split the keyboard if you like. It was Roland’s flagship synth at the time, and its last analog machine of the classic era. 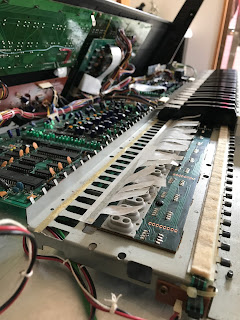 I wish I could say that I’m getting the most out it, flying high on a wing and a pad. No, this machine has “issues” and I knew that when I bought it. It has a few more issues than were initially mentioned on the Yahoo Auction listing, but I bought it “as is” so buyer beware. Also it was only around $250 so I really can’t complain. But the upshot is I have a new project synth.

The main issue, the one I knew about going in, was stuck notes. It seems that this is a really common issue with the JX-10 and other Roland synths of the era, so the first thing I did was take apart the keybed and clean all the contacts. They seemed pretty clean already but I gave it all a once-over just to be sure. I also replaced two keys that had been raked with what looked like a box cutter.

I noticed when playing around with it that the stuck notes were only happening with the upper voice, and this problem persisted even when triggering via MIDI. With the keybed fully disconnected I tried playing it via MIDI again and had the same issue. At least now I have clean key contacts. (And I should also say the aftertouch still functions fine, something of a rarity with the Super JX, it seems.)

Another issue with my Super JX is the output. The upper voices are louder than the lower, so much so that they’re distorting. The distortion continues even when the volume of the upper board is turned down. Its unaffected by editing the voices. It’s so loud that even when turned all the way down, the upper voice is still slightly audible. (And now that I think about it, I remember still hearing sound even when I tried turning down the volume on the oscillators in edit mode. Curious.) 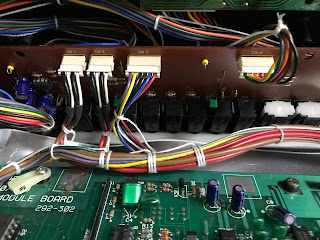 Checking around online, a member of the Roland JX-10 And MKS-70 Synthesizers group had a similar issue. Other members suggested looking at the jack and volume boards. I pulled the jack board out and examined it for any obvious issues, like cracks in the traces, burnt-out components or dry solder joints. I found some dry solder joints in a few jacks, which had become wobbly from use, but after reflowing solder the issue remained. I also poked around with my multimeter but I really don’t know what I’m doing. I thought maybe some of the green film capacitors might be bad but a friend, who’s more knowledgeable than I about these things, said those almost never fail and anyway you should really remove them from the circuit to check them. I sort of knew that already but was getting tired by this point, so I put it all back together and ordered a new jack board from eBay. (I also checked the volume board and didn’t see anything obvious.)

I’m still not sure where the problem could lie. I feel like it’s where the two boards get mixed together. When I had the keybed out I swapped the modules and sure enough, the distorted sound stayed in the upper voices, which means the fault isn’t in the board but somewhere else. What I didn’t notice was whether the stuck note issue stayed in the upper or followed the board. I feel like it stayed but I was so focused on the distortion it slipped my mind to make a note of it.

One more thing about the jack board. I tried all the different outs, and while they all work, I seem to get a mix of upper and lower voices in all jacks, even the ones that are supposed to be exclusive to each board. I have never used another Super JX so I’m not sure what this is supposed to sound like. Hopefully the new board will fix this. If not, I suppose I’ll try to order a new volume board. 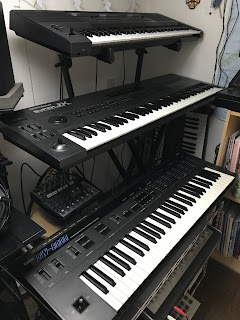 Amidst all this, I did have a few small victories. When I first powered on the machine, I got flickering in the display, and a few missing characters or lines. After unfolding a kink in the display ribbon it seems to be working fine. So that’s one less thing to worry about.

Also there were traces of where someone had stuck scotch tape to the front panel. After consulting online about the best way to handle this, I used a combination of Magic Eraser and WD-40. It looks pretty good now. Not 100% but good enough. However, I was so excited about the Magic Eraser I used it all over the machine, and I ended up taking off some of the coloration on the right end piece, which is plastic and not metal like the panel. What I thought was dirt coming off was actually the color. It looks like I might eventually be replacing that too.

So what’s next? Assuming I can get the voices sounding sweet with no stuck notes or distortion, the next thing I plan to do is upgrade to the Vercoven flash module. Because I don’t have a memory cartridge, I can’t replace the internal battery without losing all the patches. With this new firmware I can change that battery and do a sysex dump of the factory patches from my Mac.

After that I’d like to replace the tact switches and maybe find a memory cartridge so I can use the sequencer. The bar under the keys is scratched, so I’ll be keeping my eyes out for a new one. And also I’d like to change that overly cleaned end cap.

Lots to do. It’s frustrating because I can’t even enjoy the synth yet due to the stuck notes and distorted voices. But from what I’ve heard so far, it seems like it’ll be worth it.